The Muckleshoot Indian Tribe, the Affiliated Tribes of Northwest Indians and the National Congress of American Indians are taking a stand against the threat of genetically engineered salmon.

“Creating genetically engineered salmon would mean that our traditional knowledge and relationship with salmon would pass out of our hands to a transnational corporation,” said Valerie Segrest, a traditional foods educator with the Muckleshoot Tribe.

The NCAI passed a resolution yesterday asking the federal government to reject a proposal to mix genetic material from chinook salmon and eel-like fish with Atlantic salmon, joining the Muckleshoot tribal council and ATNI. The genetically engineered fish would grow to full size in three months compared to three years for a natural salmon.

Because the genetic modifications to the salmon would be classified as a “food additive,” they would be protected under a patent as intellectual property. “It isn’t a stretch that these fish could eventually escape into the wild and spawn with naturally spawning fish or salmon in our hatcheries,” Segrest said. “At that point, a private corporation would have ownership of salmon in our streams and in our hatcheries.”

In more than 140 cases, a single company that owns patents on genetically modified plants has successfully sued farmers whose crops were unintentionally infected with genetically engineered seed. “These were cases where neighboring farms, obviously not trying to steal trade secrets, had genetically modified seeds cross pollinate with heritage seed stock in their fields through natural processes,” Segrest said. “We don’t want the same sort of thing to happen to our salmon. No one should own the genetic code of our salmon or our culture.”

Genetically modified salmon also wouldn’t provide the health benefits that naturally evolved salmon do. “These fish have less of the healthy proteins and fats that our wild salmon are famous for.” Segrest said.

One of the most worrisome aspects of the fish is that because they grow so fast, they also take in more pollution than a naturally evolved salmon. “Pollution is already a problem for tribal people who depend on fish and shellfish as part of their diet,” Segrest said. “These fish straying into the natural environment would magnify the pollution problems we’re already facing.”

Even though some major chains have vowed not to sell genetically engineered fish, the cost to the consumer would be so low that it would make livelihoods of tribal fishermen that much harder. “This fish wouldn’t have to be labeled in the grocery store,” Segrest said. “So you wouldn’t know if you were purchasing a fish caught by a tribal fishermen or one that was genetically modified.”

Genetically engineered salmon would drive a wedge into a relationship between Indian tribes and salmon, a relationship that has shaped our culture thousands of years. “Our way of life has evolved alongside salmon,” Segrest said. “Allowing genetically engineered fish into the food system, or accidentally allowing them into our streams, would cause irreversible DNA damage and negatively change how we depend on the salmon.” 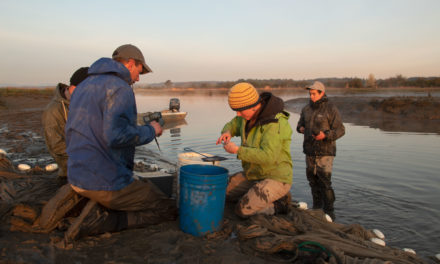 Letting The Tide Come In At The Nisqually Estuary