Removing dikes around 214-acre Nalley Island will net a big payoff for fish and shellfish in the restored estuary.

An excavator opens up one of the historic channels within Nalley Island.

“Restoring Nalley Island back to its original historic condition as part of an estuary will benefit everyone in the area – from our tribal members to the fish and wildlife that use the site for feeding and resting,” said Joseph Pavel, the Skokomish Tribe’s natural resources director.

The island restoration is the second phase of the tribe’s effort to restore the Skokomish River estuary. The first phase was completed in 2007, when dikes west of the island were removed to restore 108 acres of tidelands.

A large portion of the Skokomish estuary was converted from a pristine estuary to Nalley Farm in the late 1930s. At the time, the area was a productive estuary with miles of branching tidal channels. Dikes and ditches were constructed to prevent tidal and river flows across the surface of the island and permanently drained the area.

The confined river flow prevented aquatic species and salmon from accessing the wetlands where fish rear and take refuge during storm events. The lack of tidal flow also severely changed the characteristics of the estuary vegetation and groundwater.

“With the dike removed, we’re reintroducing key physical, depositional and erosion processes that will allow the estuary to restore itself,” said Alex Gouley, the tribe’s habitat manager. “The salt marsh and channel networks that provided key habitat in the past will rapidly return.”

Endangered Species Act-listed salmon and other fish in the Skokomish Watershed are expected to benefit from the restored habitat, including Puget Sound chinook, summer chum, steelhead and bull trout. The project will also enhance habitat for birds and other wildlife.

The Kitsap Sun, The Olympian and the Tacoma News Tribune reported on this story and KING5 did a report. 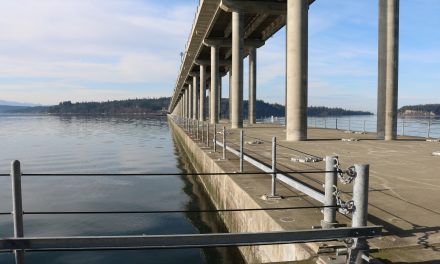