LACEY (July 12, 2005) – While the drought threat has lessened this summer, for fish the problem is getting worse every year because of development-caused low stream flows.

“Low stream flows from little rain is no different to fish than low flows caused by development,” said Jeff Dickison, assistant natural resources director for the Squaxin Island Tribe. “While droughts may come only every few summers, lack of water because of development gets worse every year.”

“In some places, even in normal precipitation years, we run out of water for fish because of the impact of development,” said Dickison. A good example is Lake Lois and the Woodland Creek watershed near Lacey, which regularly sees a significant drop in water level every summer.

“In the past Lake Lois was likely full throughout the summer,” said John Konovsky, the tribe’s water program manager. “Because of an increasing amount of water drawn from both public and private wells the lake drains significantly.”

Much of the water drawn from Woodland Creek is taken by exempt wells – unpermitted and unreviewed wells that draw less than 5,000 gallons a day. Exempt wells aren’t subject to the same level of scrutiny that larger wells are because it is assumed that their impact is minimal. But, when you add a lot of these wells together, they have a huge impact on the amount of water flowing through Woodland Creek.

“Because of exempt wells, the Woodland Creek watershed is dying a death of a thousand cuts,” said Dickison. “While you can’t point to one large user, dozens of small scale wells are ganging up on the creek and on the fish.”

Urbanization in the watershed and the accompanying increase in impervious surfaces – such as parking lots, roads and other surfaces that water can’t seep through – has decreased the amount of water that is stored in the watershed after rains. “More water flows straight into the creek and out into Puget Sound, when it used to slowly seep underground,” said Konovsky. “The result is more floods during rainy times, but less water stored underground, therefore lower stream flows, when it’s not raining.”

Historically, the Woodland Creek watershed produced strong populations of coho salmon. “There are accounts of salmon going as far up as Long Lake, in the far reaches of the watershed,” said Konovsky. “Coho salmon often spend an extra year or two in freshwater as juveniles. Without these small lakes and wetlands, like Lake Lois, coho have nowhere to survive and feed during that extra year in freshwater.”

“Woodland Creek is not unique, there are thousands of small creeks throughout the Puget Sound that at one time used to be home to thriving salmon populations,” said Dickison. “We can have a summer with normal, or even above average rainfall, and because of increasing demand, there still isn’t enough water for salmon.” 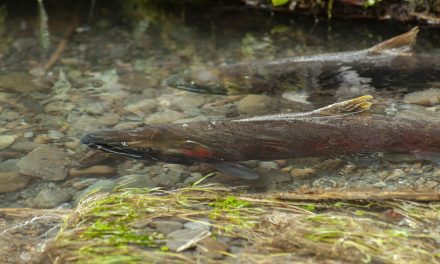 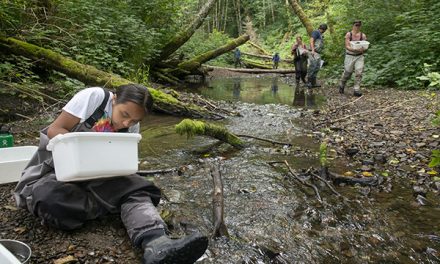