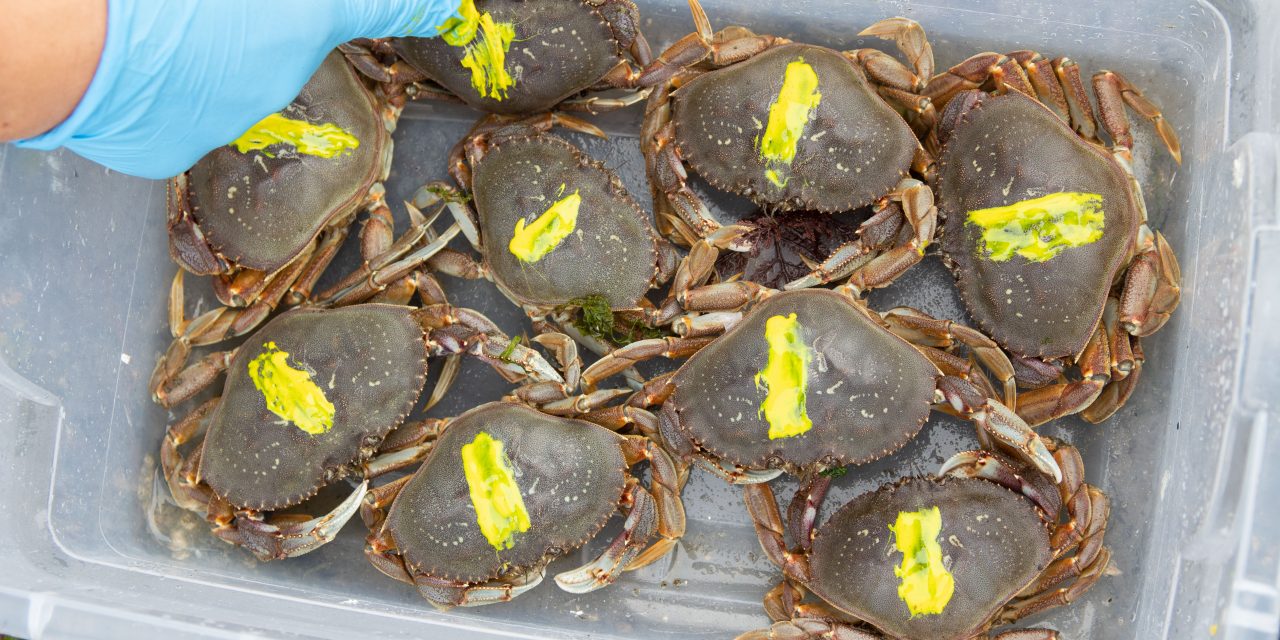 A sample of native Dungeness crab and problematic European green crab in the Tsoo-yess River got a smear of red, white or yellow epoxy on their carapaces last summer.

The Makah Tribe marked these crab groups to gather data about their population numbers using a mark-recapture method after Adrianne Akmajian, the tribe’s marine ecologist, had questions about the shellfish population in the Neah Bay area.

While the tribe has trapped and removed thousands of European green crab over the past few years (more than 5,000 removed since 2017), Akmajian wanted to better understand their population growth.

After retrieving the traps daily, the crew measured up to 10 male and 10 female Dungeness and European green crabs to get a random sample of the population, and then marked all of the crabs with a swipe of epoxy that was stained with a color of the day – white (Tuesday), yellow (Wednesday), red (Thursday). All were released back into the river except for the female European green crab to prevent further reproduction. Over the course of the week, the tribe recaptured several of the marked crab.

“This mark-recapture effort is primarily targeting adult-sized European green crabs that we normally see in the main river channel; we are not marking crabs in the tidepools and side channels where we normally see younger crabs,” Akmajian said. “For Dungeness crabs, we primarily catch juveniles and sub-adults that are rearing in the lower rivers here. It is important to get a clearer picture of this overlap in habitat use by the native Dungeness and invasive green crabs and evaluate the potential impacts of green crabs on our native species.”

By the end of the marking week, the tribe had marked more than 900 individual Dungeness crabs and more than 100 European green crab. While the tribe was able to create a baseline estimate of population size, there is more work to be done next year, Akmajian said.

“We did encounter a few issues during our trapping week, including rain on the third day of marking that made it hard to keep crabs dry and made it harder to apply the epoxy,” she said. “Biases such as marks not staying on the crabs can really reduce our confidence in the population estimates. We plan to continue this project next year.”

The tribe also set up underwater video stations to monitor the interactions between the Dungeness and green crab, such as if they’re aggressive toward each other or preventing one another from accessing the bait.

To further address green crab eradication efforts, the tribe had planned to finish the summer field season with a large green crab trapping event in partnership with the Washington Department of Fish and Wildlife from the Tsoo-Yess River and nearby Wa’atch River, but COVID lockdown restrictions prevented that.

“While we were unable to do the large effort we had planned, we were able to put out 15 traps over a single night in both rivers in early October and collect over 350 crab,” she said. “After a few months of doing observational studies instead of our normal removal trapping, it felt good to remove a large number of crabs before the start of next season.”

Dungeness crab were marked with tinted epoxy then released into the Tsoo-yess River this summer, with the expectation they’d be caught again in the Makah Tribe’s traps, giving an idea of population numbers. Photo: Tiffany Royal

The Social Fabric of a Community