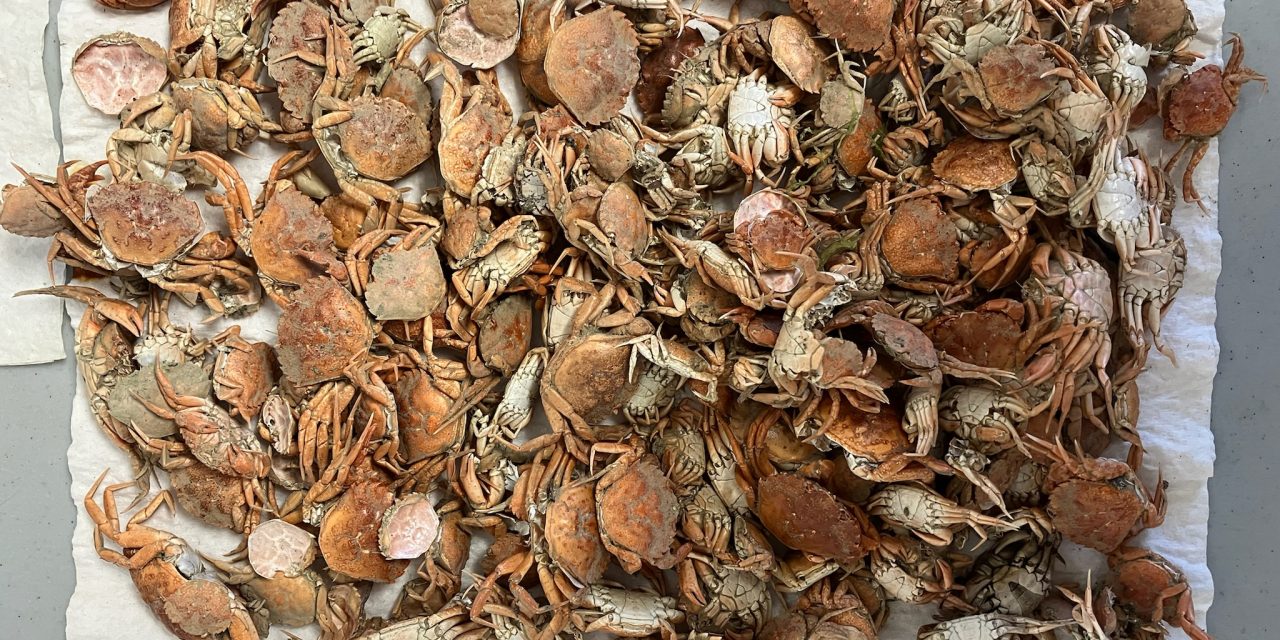 The Makah Tribe’s European green crab invasion has hit yet another alarming benchmark, with more than 1,200 crab captured within the first two months of the trapping season.

“We caught more in April and May this year alone than we have by the end of whole seasons of trapping,” said Adrianne Akmajian, the tribe’s marine ecologist. In 2021, the tribe caught more than 1,400 when trapping efforts ended in October.

“In the Tsoo-yess River channels, you can find 20 or 40 of them within a span of 5-10 minutes in very small tidepools or under patches of algae or eelgrass,” she said.

Thousands of the invasive green crab have been found within the tribe’s primary waterways since 2018, having been one of the hottest spots in the state for the crab.

Gov. Jay Inslee issued a January 2022 emergency order for state agencies to take measures to battle the infestation. He urged the state Legislature to provide emergency funds to support agencies’ and tribes’ efforts. Tens of thousands of the invasive crab were found in Lummi Nation’s sea pond in fall 2021, and the first invasive crab was captured in May in Hood Canal, the southernmost point in Puget Sound where they have been found.

“While we now have extra money from the state to increase staff capacity to help, it’s only for the short term,” Akmajian said. “There needs to be long-term funding for trapping and monitoring if we’re going to try and control the invasion through removal trapping efforts.”

Of the 1,200 caught so far this year by the tribe, more than 900 were caught by hand during visual surveys. The majority of those were less than an inch wide, which tells Akmajian that the young juveniles were born this winter.

These juvenile crabs typically are buried in gravel, mud or algae but will pop out as observers are walking by, she said, or the edge of the shell is visible.

They’ve mostly been found in the Tsoo-yess River, but more and more are showing up in the Wa’atch River, where 150 were found in one week in May.

“This must have been a really good winter for them when they settled,” Akmajian said, noting that crab tend to be more reproductive during warmer winters.

The tribe also caught its first female with eggs this spring, confirming for Akmajian that local reproduction is happening within local waters.

“We have no idea where they came from though since their larvae spend several months in the ocean and are dispersed by ocean currents, so the crabs here could have easily come from populations to the south or north of us.” she said. “And there’s no way we’re going to be able to catch them all.”

The past few years, Akmajian has used shrimp traps to catch the adult crab, but with the influx of smaller crab, she is diversifying catch methods, including by hand and with minnow traps.

European green crab are a threat to Dungeness crab, oyster and clam fisheries as the invasive species feeds on native crab, clams, oysters, marine worms and small crustaceans. They damage nearshore habitat by burrowing into the mud and damaging eelgrass beds, which are critical habitat for shellfish and salmon. On the East Coast, European green crab are blamed for the collapse of the eastern softshell clam industry in Maine.

While the tribe has been trapping for five years, it’s been frustrating to have this big pulse show up, she said.

“Climate change is a real concern with these crab,” she said. “Warmer winters lead to more crab settlement. If the climate warms, and we have warmer winters, European green crab aren’t going away and are getting worse. Even if we did a really good job removing them locally, we could have larvae come up from Oregon and have another pulse.”

Feeling a bit like the canary in the coal mine, she’s continually alarmed at when and where they’re showing up throughout the state. But after this spring, she’s feeling even more vocal.

“What I’m seeing right now is a good indicator to others that this is a good year to be really looking,” she said.

If a European Green crab is found (here’s how to identify it), it should not be removed, and photos and detailed location information, such as geographic coordinates, should be reported to crabteam@uw.edu.

A pile of European green crabs molts collected by the Makah Tribe in May. Photo: Adrianne Akmajian, Story: Tiffany Royal