NEAH BAY- The chattering sound of hundreds of decorative purple olive shells has accompanied Makah tribal dancers for at least 500 years. The three-quarter-inch shells have been found in the oldest archeological digs in Neah Bay. Holes pierced in the end indicate they were used for necklaces, headbands, belts and other decoration.

Makah tribal member Evan Bowechop, 16, is reminded of the history as he counts the living shells in the surf where they are found on Hobuck Beach, near Neah Bay. It’s part of his summer intern job with the Makah Natural Resources Department. He and partner Michael Murner, 17, conducted a survey of the olive shell population that will help Makah natural resource managers get an idea of the numbers and locations of the small, snail-inhabited shell.

“The idea is to have the interns do this survey each summer so we can start to establish population patterns,” said Jonathan Scordino, marine mammal biologist for the Makah Tribe. Even as the interns worked one foggy morning, a group of tribal members was harvesting the shells a little further down the beach.

While tribal members collected the shells, Murner and Bowechop continued their survey, counting more than 1,000 in patch.

Each year, students work in a variety of natural resources departments within the tribe, learning about different kinds of jobs and assisting with the natural resource management activities. The hope is that some tribal members will become interested in pursuing advanced education in a related field and come back to work for the tribe. The interns finished the summer by presenting a paper to tribal members about their activities, including one by Murner on the olive shells as well as assigned topics. “It was an interesting summer,” said Bowechop.”It kept me busy and I learned a lot.”
-End- 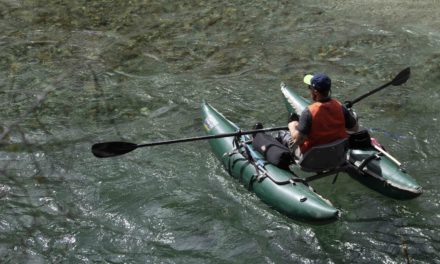 Tracking steelhead from the sky