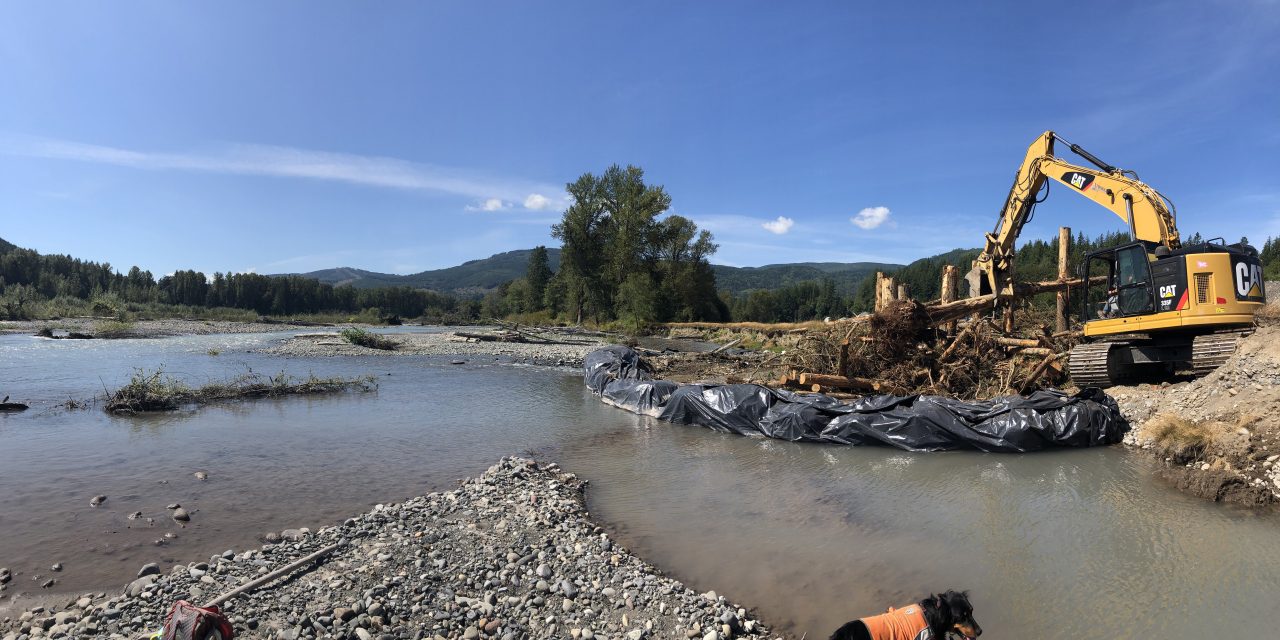 The last of 127 engineered logjams were placed in the Farmhouse reach of the North Fork Nooksack River this summer, completing an extensive multi-year salmon habitat restoration project.

The Nooksack Tribe installed large woody structures in the North and South Forks of the Nooksack River nearly every year since 2008. This summer, the final 56 logjams were placed in the 3-mile-long reach of the North Fork located near Maple Falls, completing restoration that began there in 2014.

Restoring river habitat is essential to recovering threatened salmon populations in the Nooksack watershed. Habitat in the North Fork Nooksack was degraded and made unstable by years of instream wood removal, clearing of riparian forests and more frequent large floods.

“The Farmhouse Reach is one of the most unstable and volatile reaches within the North Fork Nooksack with high channel turnover rates. It’s kind of like a firehose,” said project manager Lindsie Fratus-Thomas who has managed the project for the tribe through all five construction seasons. “This project is a process-based restoration project in which one of the goals is to stabilize the main channel and protect those nice side channels, which are the preferred habitat for salmon in this system.”

Engineered logjams stabilize side channels for salmon to spawn and rear in, and form pools for them to rest in. Projects like these restore natural habitat processes. For example, logjams slow currents and create areas where gravel accumulates to form islands.

“As trees colonize those islands and grow to maturity, the islands stabilize and grow, helping to form the side channels that are so productive for salmon,” said Treva Coe, Nooksack watershed restoration program manager.

Ambitious projects like these are only possible with the hard work and support of staff from many agencies and partners, including the expertise from several Nooksack Natural Resources tribal staff, engineering consultants, log supply and construction contractors, and funding and permitting agencies, Fratus-Thomas said. This year, for the first time, BNSF Railway partnered with the tribe to donate trees they had removed because they posed a hazard to railroad operations. The U.S. Forest Service provided a similar wood donation to the project in one of the previous phases in 2016.

“We look for opportunities to help projects such as these,” said Danniel MacDonald, BNSF general director, line maintenance. “Working in collaboration with the Nooksack Tribe, we were able to deliver some of the wood and racking material that was needed for this project. It was the best use of the natural resources available.”

MacDonald and contractor Ross Widener joined Coe and Fratus-Thomas on a site visit in August.

“BNSF is always looking for ways to work cooperatively with tribal partners to improve the natural resources we all benefit from,” Widener said. “As a result of time spent together, BNSF leadership is now aware of the cultural need for certain types of large cedar trees and will help out with this need if the opportunity arises.”

Many of this year’s logjams were constructed directly in the wetted river channels. Construction impacts were minimized by isolating areas of in-water construction and temporarily diverting flow around those areas. Nooksack Tribe biologists and technical staff performed fish rescue (commonly referred to as fish exclusion), by removing fish prior to excavation. The fish are identified, counted and safely released downstream.

Lessons learned from constructing and monitoring previous projects helped in the design and construction of this year’s project, Coe said.

“That process of learning and adaptive management will benefit future projects as well,” she said. “Recovering Nooksack salmon will require that we continue this work for years to come.  We want to ensure that our efforts are as efficient and effective as possible.”

North and Middle Fork Nooksack early chinook are a genetically unique, native population with low numbers of returning natural-origin fish. The Nooksack Tribe hasn’t had a directed commercial fishery on early chinook in the Nooksack River since about 1980.

The Farmhouse reach is upstream from the state’s Kendall Creek Hatchery, which runs a chinook supplementation program to help recover the population. Over time, as habitat recovers, more chinook are expected to return to and spawn in the reach. The project also benefits steelhead, bull trout, cutthroat trout, and coho, chum and pink salmon.

An engineered logjam is installed in the Farmhouse Reach of the North Fork Nooksack River. Photo: Lindsie Fratus-Thomas