This year, tribes reached the harvest goal of more than 300,000 pounds of sea cucumbers in the San Juan Islands for the first time since a 1995 court ruling that upheld their treaty shellfish harvest rights.

For the Lummi Nation, the sea cucumber harvest provides some relief from the impact of having salmon fisheries closed because of declining runs.

The Lummi Nation’s schelangen, or “way of life,” has always centered around the natural resources of the sea. The harvest of fish, shellfish and other ocean-dwelling creatures not only is an important part of tribal members’ income, but also their culture.

“Crab, prawn and salmon seasons are short, so dive fisheries are a more stable source of income for Lummi tribal members,” said Cliff Cultee, a fisherman, tribal councilman and member of the Lummi Fisheries Commission.

It has taken some time for Lummi to develop the skills and obtain the equipment to participate fully in the dive fisheries.

Sea cucumbers harvested by tribal members are predominantly exported to Asia, where they are a delicacy.  Known as “namako” in Japan, sea cucumbers are related to starfish and sea urchins, and occupy a niche in the Japanese culture.

Tribes thought they might have to close the fishery early because of strong markets and an increased number of divers. The harvest limit had been set artificially low in recent agreements as a precautionary matter in the absence of specific information on sustainable harvest levels.

“We do need to safeguard the population, but there’s not a lot of knowledge about how sea cucumbers age or repopulate,” said Elden Hillaire, chairman of the Lummi Fisheries Commission. “We’ve been giving back to the resource by not harvesting our entire quota all these years.”

The Lummi Nation has more than 500 fishermen, and 18 of those are registered dive fishermen.

“Our whole fleet is diversified into a lot of different fisheries,” Hillaire said. “We’ve seen crab fishermen try out dive fisheries and stick with it.”

Oil-bearing trains equivalent of moving bombs through cities and towns 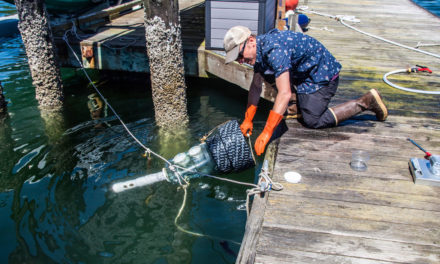 Federal Update for May 2008