A combination of Lummi Nation projects not only will repair past destruction of more than 2,000 acres of salmon and wildlife habitat, but also will help build homes for tribal members.

The Lummi Natural Resources Department is reconnecting tidal channels and restoring wetlands to provide essential rearing habitat for juvenile salmon along Smuggler’s Slough. In a separate but related project, Lummi is creating the first tribal wetland and habitat mitigation bank in the country. The wetland and habitat mitigation bank will generate credits to offset any unavoidable impacts of development elsewhere, including homes built on tribal members’ land assignments and Lummi Nation economic development projects.

While the two complementary projects share the goal of restoring habitat and fish passage, the funding is separate. Restoration project grant money cannot be used for work that generates mitigation credits.

Smuggler’s Slough once provided fish passage between Bellingham Bay and Lummi Bay, but it was turned into a drainage ditch in the 1930s when most of the Nooksack River delta and associated estuary was converted to farmland.

The Lummi Nation has been evaluating the restoration of the Nooksack estuary since 1998 and seeking funding for the restoration project since 2005 when a habitat assessment by the tribe targeted Smuggler’s Slough for restoration. Some of the former estuary had been deeded to tribal members after it was turned into farmland. The tribe bought that property outright or obtained conservation easements using funding from the state Salmon Recovery Funding Board, U.S. Department of Agriculture’s Natural Resources Conservation Service Wetlands Reserve Program and the U.S. Fish & Wildlife Service through the Department of Ecology’s Coastal Wetlands Program.

Additional funding for the restoration project comes from the National Oceanic and Atmospheric Administration’s Coastal Wetlands American Recovery and Reinvestment Act, the U.S. Fish and Wildlife’s Coastal Program and Tribal Wildlife Grant, and the state Estuary and Salmon Restoration Program.

“We have a shortage of buildable land for homes on our reservation, because so much of it is wetlands,” said Merle Jefferson, natural resources director for the tribe. “These two projects not only will restore fish and wildlife habitat and improve water quality for shellfish beds, but also will generate income to stimulate the local economy.” 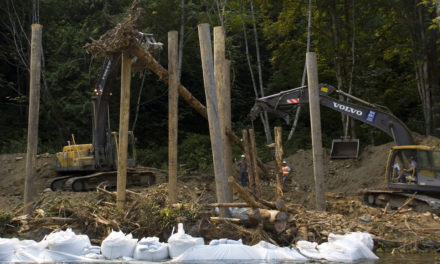