What we know now is that this proposed development would be the largest to date at Cherry Point, and would substantially impact the ability of Lummi fishermen to exercise their treaty rights.

The pier would be large enough to accept massive Cape-size ships – which are too big to even travel through the Panama Canal, can carry 250,000 dead weight tons, and may require as many as four tugboats to guide them into port.

This increased vessel traffic will present a particular hazard to tribal fishers in their comparatively small fishing boats and will interfere with fishing.

Other Lummi Nation concerns about the terminal include:

Our Lummi ancestors had a village at Cherry Point because of its unique deep-water resources. Today, this site is also one of the most commercially valuable ports on the West Coast.

As we have in the past, Lummi Nation will conduct its due diligence to ensure that if this project is developed, negative impacts will be avoided or minimized and any unavoidable impacts appropriately mitigated.

Our Lummi people would expect no less than a thorough investigation when an important aspect of our Lummi schelangen hangs in the balance. 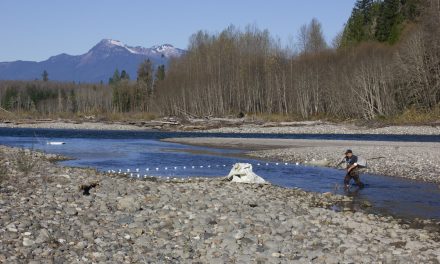 Cold water refuges could mitigate some impacts from climate change