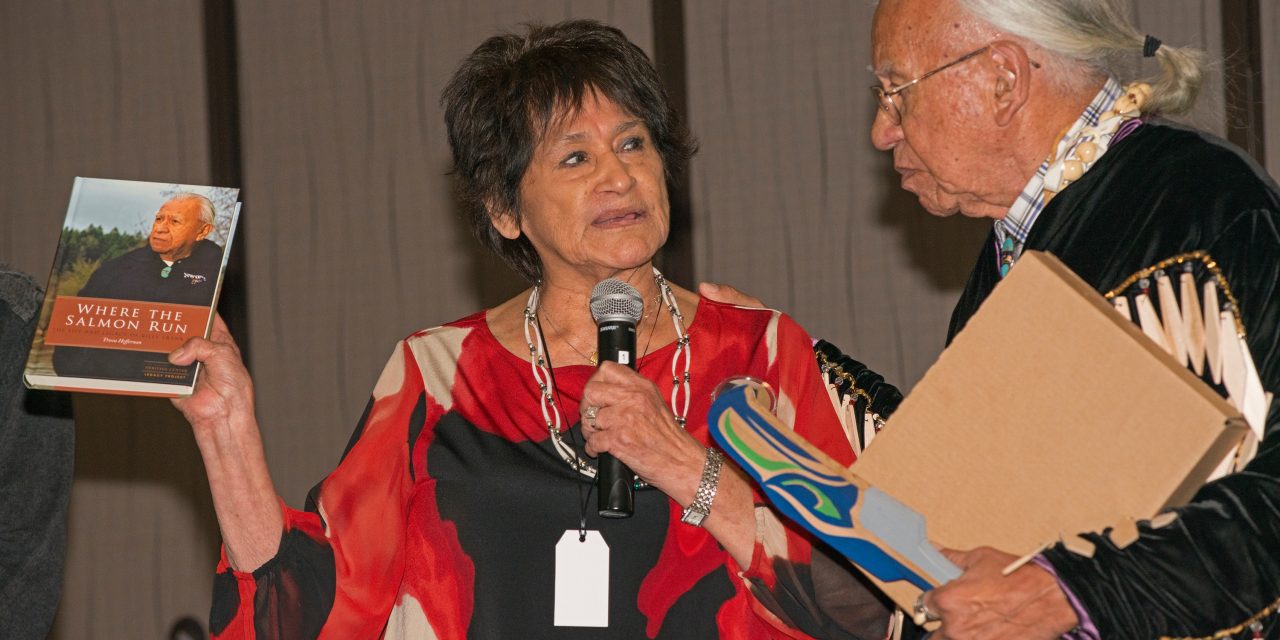 Born and raised on the Swinomish Reservation, Lorraine came from a family of fishermen and was around the fishing industry her entire life. She grew up fishing with her brothers Claude Sr., Tandy Jr., Vince and Marvin Sr. All of her children and many of her grandchildren, nieces and nephews fish as well.

Following her graduation from La Conner High School in 1958, Lorraine attended Skagit Valley College. After she moved away from Swinomish for a short time, Lorraine’s career in fisheries started at the Tribe’s fish processing plant in 1970. This included cleaning, smoking and freezing fish, and ultimately working her way up to assistant manager of the plant. It was hard work and long hours.

Not too long after the 1974 Boldt decision, which reaffirmed the tribes’ treaty-reserved fishing rights, Swinomish tribal leaders asked Lorraine if she would serve as the Tribe’s fisheries manager. She accepted the position, thinking that fisheries management might be easier than fish processing, but soon discovered it wasn’t. Lorraine still found herself working 14 hours some days but found it very rewarding.

Lorraine broke the glass ceiling as she entered the world of fisheries management. Still largely a male-dominated environment, Lorraine became one of the first women to play an active role in fisheries policy and management. Once she broke through this ceiling, Lorraine ultimately became one of the most prominent figures at the highest levels. Lorraine’s groundbreaking pathway and work ethic has provided inspiration to many others.

Fish and shellfish management would continue to fill Lorraine’s plate over the next several decades. Lorraine served on the Northwest Indian Fisheries Commission for over 40 years. She succeeded long-time chairman and tribal treaty rights activist Billy Frank Jr. as the chair of the Commission after Billy’s passing in 2014. She previously served as vice chair from 1995 to 2014 and treasurer from 1993 to 1995.

Lorraine also was co-chair of the Billy Frank Jr. Salmon Coalition and founding board member of Salmon Defense.

Lorraine was honored and humbled to follow in the footsteps of Billy as chair. She knew no one could ever truly replace him and that it would take all the tribes collectively to fill that void. But Lorraine left her own mark. In October 2020, she was honored with the Billy Frank Jr. Leadership Award for her decades of dedication in defending tribal treaty rights.

Lorraine recently served as vice chair of the bilateral Fraser River Panel that manages sockeye and pink salmon under the U.S./Canada Pacific Salmon Treaty. She served on the Fraser River Panel since 1985. She was also vice chair of the board of directors for the Skagit River System Cooperative, which is the natural resources consortium of the Swinomish and Sauk-Suiattle tribes. Additionally, Lorraine continued to coordinate tribal participation in the North of Falcon fishery planning process with the state of Washington.

Lorraine witnessed and contributed an unprecedented amount in her lifetime, including advances in salmon co-management, both regionally and internationally. Lorraine said that it wasn’t until 1982 that true co-management became a reality through the development of the first joint Puget Sound Salmon Management Plan by the tribes and state. Lorraine played a big part in that. She was especially proud of tribal involvement in developing and implementing the U.S./Canada Pacific Salmon Treaty that governs the sharing of salmon between the two countries. She always said that cooperation was the key to salmon recovery and upholding tribal treaty rights.

Lorraine loved fisheries management and working to ensure there will be salmon for the next seven generations. When Swinomish had a fishery opening, she relished seeing the happy faces of the tribal fishermen. When that happened, she knew she had done her job. She lived for that – she said it was her life.

While she dedicated so much of her life to the Northwest Indian Fisheries Commission and the Swinomish Tribe, where she also served as Senator from 1985 to 2000, Lorraine’s biggest source of strength was her family. Lorraine’s parents had a significant impact on her life. Her father, Tandy Sr., was general manager of the Tribe for more than 40 years, and her mother, Laura, served on the Tribal Senate for more than 50 years. Lorraine was the proud matriarch of the large extended Wilbur family.

Lorraine was preceded in death by son Ronnie Loomis, her parents, and brothers Tandy Wilbur Jr. and Claude Wilbur Sr.

A day of honors for Billy Frank Jr.