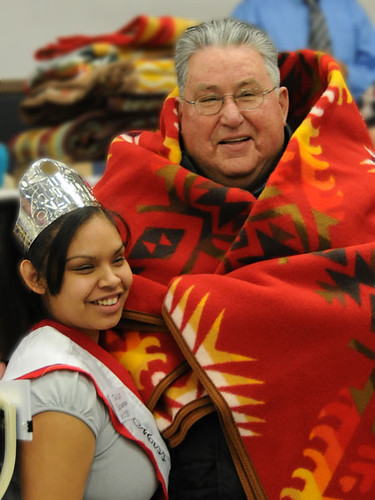 McMinds graduated from Moclips High School in 1955, attended Grays Harbor College, served two years in the US Army, then went on to receive a Fisheries Science degree from the University of Washington in 1966. He then returned to the Tribe, where he was elected to the Quinault Business Committee. He served for many years as the Nation’s Fisheries Manager and Natural Resources Director. He retired in 2010 from his position as Advisor to the President of the Quinault Indian Nation.

In the mid-1960s, Guy McMinds met with the US Department of Commerce officials successfully obtaining funding to organize the Quinault Department of Natural Resources. This allowed the Tribe to implement research technology with new practices and innovative technology in salmon hatcheries, aquaculture and stream rehabilitation. The technology developed led to its worldwide use today.

He was also an active leader in Indian fishing rights leading to the Boldt Decision in 1974. Challenges following the Boldt Decision remained in both the state and federal legislatures and federal courts. After numerous appeals, the Boldt Decision was upheld by the US Supreme Court in 1979. In response to pressure from their constituents, some member of the Washington State Congressional delegation pressed for legislation to abrogate Indian treaty rights. McMinds, with his command of the facts and personal determination, led the fight to turn the treaty abrogation legislation into the 1980 Salmon and Steelhead Conservation and Enhancement Act, which recognized tribal co-management and focused on problems that had long plagued the salmon and steelhead resources of the Pacific Northwest.

As a strong advocate of Native rights and tribal governments, Big Butch (as he’s known in all Alaska), joined one of his longtime colleagues in a new challenge to assist the Aleuts through the tribal government of St Paul Island, Alaska, Tanadgusix Corporation and the Aleut Corporation. The Aleuts made huge strides in strengthening their governance and as a result of Butch’s efforts over twenty plus years, the lives of Aleut people are much improved.

While best known for his vital contributions to tribal fisheries and his role as a protector of Quinault lands, Guy McMinds also devoted his life to the needs of children and families. McMinds was a founding member of the National Indian Child Welfare Association; he served on the Governor’s Substance Abuse Prevention Advisory Committee, and the Grays Harbor College Board of Trustees.

During his years of service to the Quinault Indian Nation, McMinds served on numerous fisheries bodies, including the Pacific Fisheries Management Council, the Pacific Salmon Commission, and as a Presidential Appointee to North Pacific Anadromous Fish Commission. McMinds was instrumental in the creation of the Northwest Indian Fisheries Commission (NWIFC) to give “the treaty tribes the capability of speaking with a single voice on fisheries management and conservation matters.”

In 1988, Guy worked with then Senator Dan Evans to restore over 12,000 acres of land that had been erroneously excluded from the boundaries of the Quinault Reservation. The North Boundary Restoration Act, PL 100-638, provided the Quinault Nation with the means to consolidate land and address forest management problems resulting from the allotment of the reservation into 2340 individually-owned parcels.

According to longtime NWIFC Chair Billy Frank, Jr., ““Guy McMinds was a great leader of the Quinault people and a champion of tribal treaty rights. From a young age he devoted his life to tribal sovereignty, treaty rights, natural resources, and the people of the Quinault Indian Nation. Guy was tough as nails and never backed down from a fight, but he also had a big heart, especially when it came to helping young people. We will miss his booming voice and the dedication he brought to everything he did that helped make this world a better place for all of us. We will miss him dearly.”

“This was a man who knew what it meant to be humble and assertive at the same time,” said Quinault Nation President Fawn Sharp. “Guy’s life influenced Native people throughout the world, and his presence would have been welcome just about anywhere where people care about human rights and dignity. We were so fortunate to have him here with us in Taholah. His wisdom will always be with us, and we will always be thankful for the many contributions he brought to our lives.”

McMinds is survived by Ruth, his wife of forty-five years,two brothers and two sisters, eight adopted children and 13 grandchildren. Viewing will be at the Coleman Mortuary in Hoquiam, Washington on Thursday, July 12th. Funeral Services to be held on Friday, July 13, beginning at 1pm at the Taholah Education Center Gymnasium in Taholah, Washington, with a dinner to follow. An account has been set up at the Bank of the Pacific for contributions towards the dinner and to establish a scholarship fund in Guy McMinds’ name.

In Hood Canal Olympia Oysters Are Slowly Making A Comeback

EarthFix runs story about effects of climate change on tribes