Two fish-blocking dams in the Elwha River were removed in 2012 and 2014. Since then, the tribe has seen a variety of recolonization events in the river for the first time in a century, including the reoccupation of Indian Creek by Pacific lamprey.

“This means the adult lamprey that returned to the river after the lower dam was removed in 2012 are successfully spawning,” said Rebecca Paradis, a project biologist for the tribe. “This sighting was a confirmation of successful nest building and larval rearing.”

Back in 2009, Paradis and other tribal staff observed larval and juvenile lamprey in the river, but none could be found above the lower dam. Since 2012, the tribe has seen adult lamprey make their way into Indian Creek, above the old dam site. Lamprey in their larval stage were observed in 2013 and 2014, but no one had seen juveniles until recently.

The 6-inch-long juvenile lamprey, also called a macrophthalmia, was found in February in a smolt trap on Indian Creek, where the tribe monitors juvenile fish populations as they migrate to the ocean.

It was unusual that the juvenile had begun its ocean migration so much earlier than normal, compared to lamprey seen in nearby creeks, such as Deep Creek, Paradis said.

“It usually takes four to seven years before the larvae metamorphose into juveniles and migrate to salt water but this guy took only three years,” Paradis said.

Lamprey are filter feeders as larvae. As adults,  they are parasitic on larger fish and marine mammals. They have a high oil content and are an energy-rich food for salmon, sea lions, seals and other marine species. As filter feeders, they help preserve water quality for other species.

While they look like they belong to the eel family, they are more closely related to the shark and hagfish, and are considered the second oldest fish, next to hagfish.

After adult lamprey spawn and die, they provide nutrients to the system, much like spawned-out salmon. – T. Royal 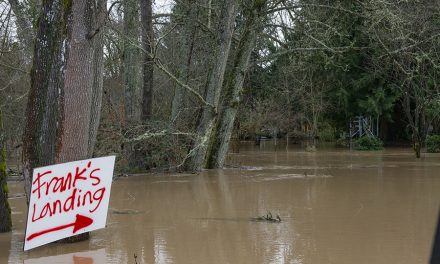