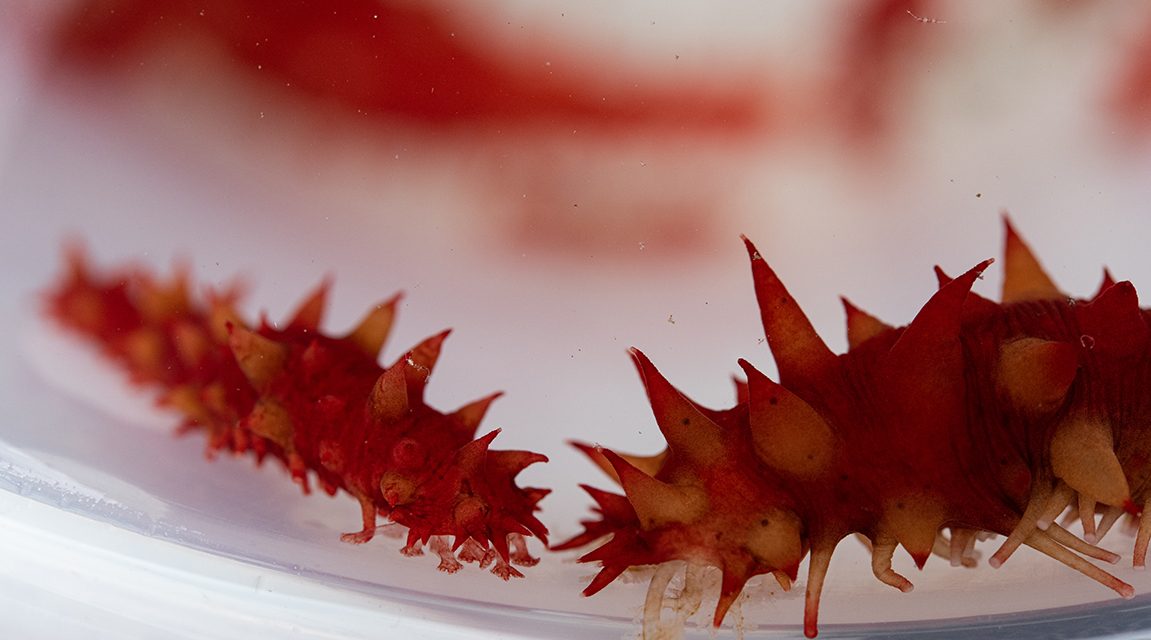 The Suquamish Tribe and the Pacific Shellfish Institute (PSI) partnered this summer to learn more about what sea cucumbers like to eat.

The institute approached the tribe about hanging mesh containers full of juvenile sea cucumbers off the tribe’s floating upweller system (FLUPSY) for shellfish in the Brownsville Marina, after discovering that sea cucumbers grow quickly after eating shellfish waste.

The tribe has two FLUPSYs used year-round for growing juvenile shellfish, which are distributed to local beaches as part of the tribe’s shellfish population restoration efforts.

Nearly 100 young red sea cucumbers, speckled with yellow and brown spots, ranging from 1 to 2 inches long and as thick as a thumb, were placed in mesh-lined baskets so they couldn’t escape and predators couldn’t enter, but algae and shellfish waste could flow through. Some baskets were placed within the FLUPSY, others were hung off the outside of the floating structure.

“We are seeing a lot of shellfish poop accumulate in the sea cucumber cages, and some sea cucumbers with full guts, so they are settling in and eating, which is definitely what we want to see,” said Erin Horkan, a PSI research technician.

The work is part of PSI’s grow-out trials with the sea cucumber offspring that came from broodstock established by the tribe and Puget Sound Restoration Fund in 2016 and 2017. Sea cucumbers are of cultural and economic importance to the tribe, and the population has been dwindling for years.

The PSI grow-out trials are to determine if sea cucumbers can grow well in an aquaculture setting alongside bivalve shellfish, Horkan said. The PSI scientists learned that sea cucumbers grow well being fed dark red seaweed but grow faster with mussel waste.

Legislative Hotsheet for the Week of February 19, 2007