The Jamestown S’Klallam Tribe wants to know which age class of steelhead is surviving best within the Dungeness River watershed.

“We’re already counting the adults and juveniles every spring and fall, so why not take DNA samples and develop an age database for steelhead?” said natural resources technician Chris Burns. 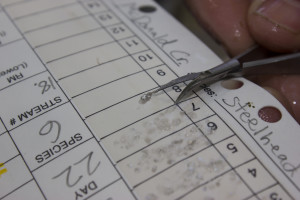 Steelhead scales are taken to be analyzed for DNA. More pictures of the study can be found by clicking the photo.

Analyzing the scales will tell biologists how long a steelhead has been in fresh water before out-migrating and how long it spent at sea. The DNA also will show whether the steelhead migrated back out to sea after spawning in fresh water.

Steelhead returns are harder to forecast because of their complex life history. Juvenile steelhead leave fresh water between the first and fourth years of life, but return from salt water in one to five years. Steelhead also are repeat spawners, returning to salt water before coming back to fresh water to spawn again during their lifespan, which can be as long as seven to nine years.

The genetics information would be shared with the state to help develop a larger database.

“By zoning in on steelhead ages, it will help the tribe with fisheries management, resulting in more accurate returns and harvest management decisions,” Burns said.

Puget Sound steelhead were listed as “threatened” under the Endangered Species Act in 2007.  The primary causes of the decline of the steelhead population include degraded habitat, fish-blocking culverts and unfavorable ocean conditions.