Today President Obama will award Billy Frank Jr. the Presidential Medal of Freedom. This is the highest honor that can be given to a civilian in the United States. Around 2 p.m. this afternoon, you can watch the ceremony here:

Lorraine Loomis, chair of the Northwest Indian Fisheries Commission, recently sat down to talk about her thoughts:

To continue to honor the life and legacy of Billy Frank Jr, Salmon Defense is offering a print edition of “Tell the Truth,” a collection of his columns. Proceeds from the book go directly to the Billy Frank Jr. Salmon Forever Fund.

The Mandela-like Frank was a fighter, fiercely committed to saving endangered salmon runs for the Nisqually people, and forcing the question of tribal treaty rights. Frank organized “fish in” protests a half-century ago and was arrested hundreds of times. His efforts culminated in the 1974 Boldt decision, the seminal ruling upholding tribal fishing rights. 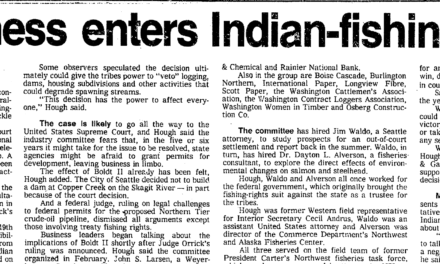 Putting Chinook And Chum Salmon Habitat On The Map