Perry, under the eye of accomplished Northwest carver David Franklin, spent 2014 carving the 12-foot tall cedar totem pole that is now mounted at the entrance of Heronswood, the botanical gardens owned by the Port Gamble S’Klallam Tribe.

“Working with Dave turned out to be a wise decision,” Perry said. “There are a lot of different tools needed to turn a log into a sculpture, many of which I do not own. Dave had all the tools that we needed and I learned a great deal working on this project.”

The two spent weeks at a time in Franklin’s carving shed, covered in sawdust and wood shavings, wielding various types of carving tools – from chainsaws to traditional planers.

Perry took inspiration for the design from traditional Salish house posts, with a heron and a frog on one side of the pole to welcome visitors, and a S’Klallam man and two canoe paddles on the other side to oversee the gardens.

“I enjoyed all aspects of this project,” Perry said. “It’s very physically demanding but also just as challenging mentally. Each step takes time and hard work. But I am just as eager to carve the next as I was the first.”

“This is the first piece of tribal art that has been installed at Heronswood,” said Laurie Mattson, former executive director of the Port Gamble S’Klallam Foundation, which oversees operations of Heronswood. “We’ve been waiting anxiously for this day to come.”

The 15 acres of gardens were started in the late 1980s by renowned horticulturist David Hinkley and his partner Robert Jones. The garden grew in popularity with gardeners worldwide as Hinkley collected plants from his international travels and planted them on the property just north of Kingston.

Heronswood was sold to the Burpee seed company in 2000, and had fallen into disrepair until the tribe purchased it in 2012. The tribe has been cleaning the gardens, saving the unique plants Hinkley brought to the gardens, and incorporating native and traditional plants.

The totem pole can be viewed during the gardens’ weekend events, which are posted at hersonwoodgarden.org. 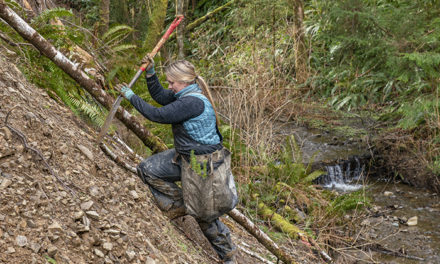