Wintry February clouds gave way to blue skies and sunshine for a celebration of the next step in the deconstruction of the Elwha River dams. More than 200 people joined the Lower Elwha Klallam Tribe to break ground on a new tribal salmon hatchery.

“The new space will allow us to expand our hatchery operations, even more so when the dams come down,” said Larry Ward, the tribe’s hatchery manager. “More fish will have better access to the river valley as well.”

Construction is expected to take 18 months and be completed by spring 2011. Once the new facility is functioning, the current tribal facility will be decommissioned after the last fish released from the hatchery return.

The new hatchery will provide additional raceways and early-rearing ponds, as well as greater control over water temperatures while eggs are being incubated.

Tribal, federal, state and county dignitaries spoke highly of the work that has been put into preparing the Elwha River valley for the removal of its two dams, the 108-foot-tall Elwha Dam and the 210-foot-tall Glines Canyon Dam. The structures – built without fish passage – have been in place since the early 1900s. Removal is expected to begin in 2011.  Currently only the lower 5 miles of the river is available to salmon.

The tribe has been working feverishly since the early 1990s to prep the river valley and floodplains for the expected increased in water flow and sediment following dam removal. Efforts have included constructing engineered logjams, removing manmade dikes, replacing undersized culverts with larger culverts and bridges, and planting native vegetation in floodplain areas.

“We’re taking advantage of this event to thank all our families, friends and allies who have supported us through the journey this far,” said Rob Elofson, the tribe’s river restoration director. “We’ve used all the influence we could to help restore the river. No one said we never lived up to our Klallam name – ‘Strong People.’” 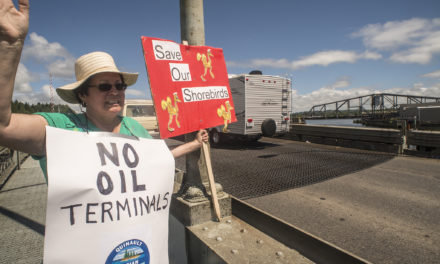 Native Nations Standing together for the Paris Climate Change Agreement