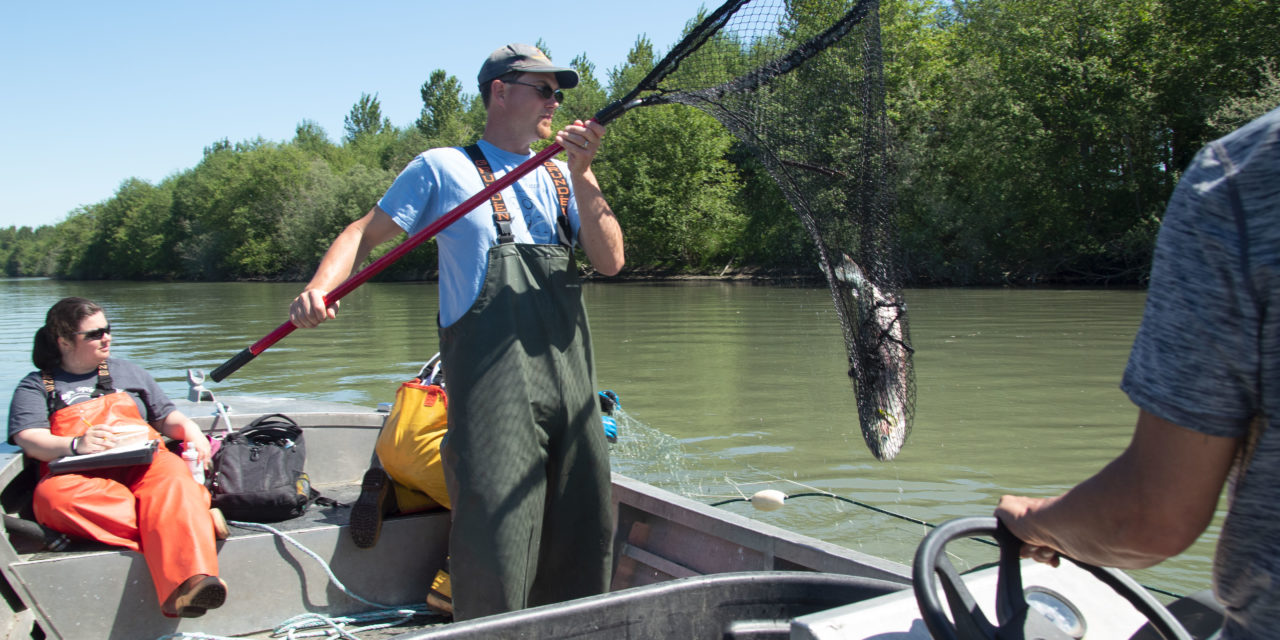 Hatchery salmon harvested in the selective fishery are served at community events such as the First Salmon Ceremony in May, Stommish Festival in June and this year’s Tribal Canoe Journey, Paddle to Lummi, in July.

These fish were produced at the Washington Department of Fish and Wildlife’s Kendall Creek Hatchery on the North Fork of the Nooksack River, and can be identified because their adipose fins were clipped before they were released as juveniles. 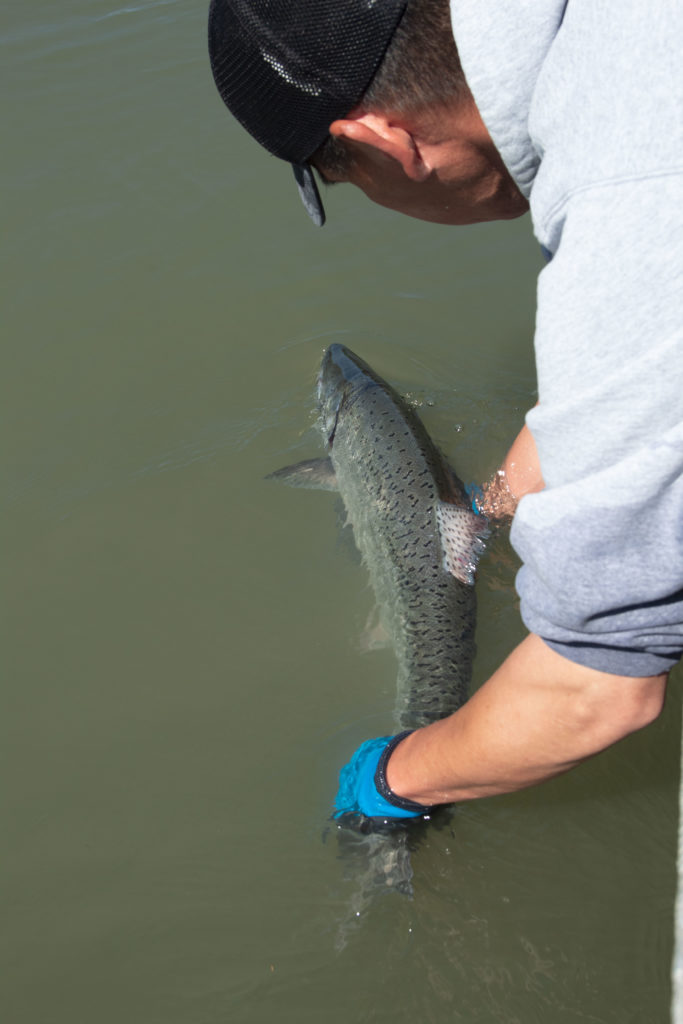 A chinook salmon is returned to the Nooksack River after being sampled and implanted with a radio transmitter.

Other fish with intact adipose fins can be released alive, because they were tangled in the net by the snout, rather than the gills or body. Some of these salmon are natural-origin and others are part of the tribe’s Skookum Creek Hatchery’s South Fork chinook recovery program.

The selective fishery enables Lummi fishermen and natural resources staff to limit encounters with natural-origin chinook to 35 to 40 a year. Tribal fisheries on healthy salmon runs can be conducted more efficiently because they do not need to be constrained to protect the weak stock.

The tribe closely monitors and regulates impacts to Nooksack River spring chinook, as managers do for all salmon listed under the Endangered Species Act.

Before they are released, each chinook has a numbered metal tag affixed to its jaw, and a radio transmitter inserted into its esophagus. Biologists also take DNA and scale samples to determine river of origin and age.

The radio transmitters will improve fisheries managers’ understanding of the freshwater migration of Nooksack River chinook, which will help future habitat restoration efforts and improve the salmon recovery program.

“High water temperatures may be creating vulnerability by affecting the chinook’s entry into the South Fork Nooksack River, which may be delaying spawn timing and inducing temperature-related pre-spawn mortality,” said Tom Chance, Lummi salmon enhancement program manager. “The future of this recovery program may be seriously affected by future droughts and rising average temperature.”

Lummi Natural Resources staff are tracking the tagged fish using radio telemetry. Through aerial and ground surveys, they document when fish enter the Nooksack River from the delta, when they reach the South Fork and how long they spend in the river before spawning or returning to the Skookum Creek Hatchery.

Fisheries managers suspect that chinook hold in certain reaches of the mainstem river until temperatures decrease in the South Fork. This study could tell them if that’s the case and where those places are. The radio transmitters also will transmit the ambient water temperature at the time the signal is detected.

“If specific reaches or pools are occupied at high rates for significant lengths of time, we intend to evaluate if preference for these areas is driven by temperature (i.e., cool water refugia), or by channel morphology,” Chance said. “For example, summertime water temperatures in the South Fork Nooksack have consistently exceeded lethal levels in recent years. As climate change becomes a bigger threat, this could compromise returning hatchery chinook as well as natural origin fish.”