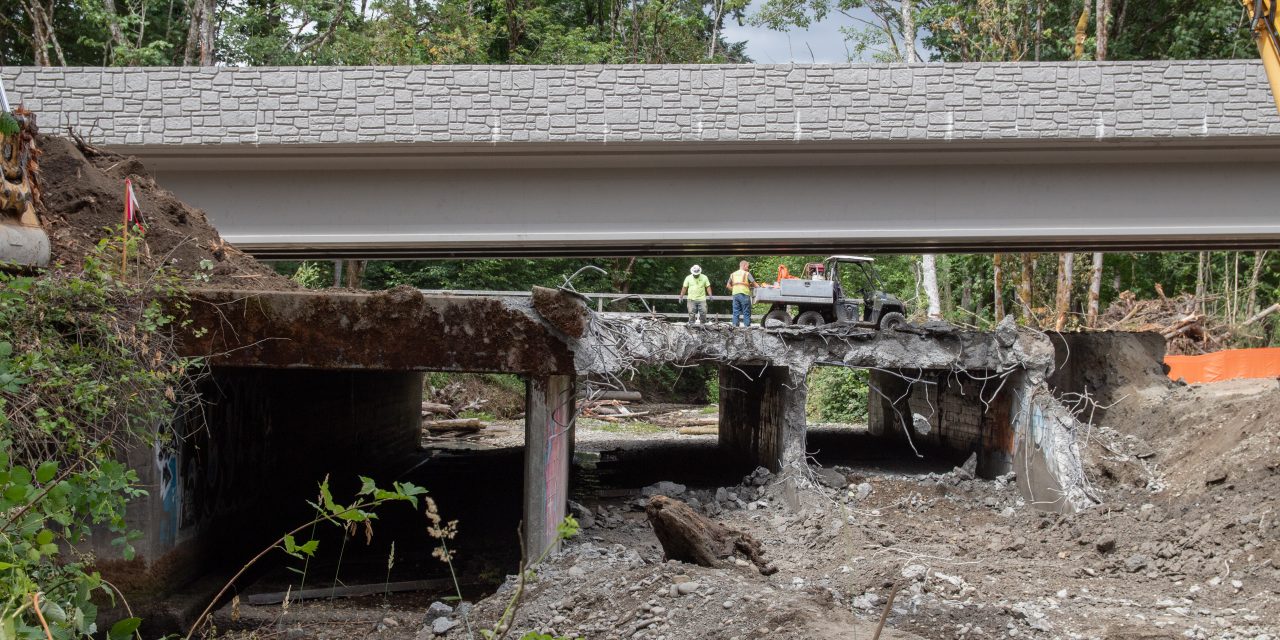 After two decades of patient planning and coordination with Kitsap County and others, the Suquamish Tribe is happy to finally see the removal of one of county’s biggest fish-blocking culverts this summer, improving habitat for its most productive salmon stream.

At Chico Salmon Park, a 36-foot triple-box culvert, originally built by the U.S. Navy in the 1940s for a railroad spur, was removed from Golf Club Hill Road and replaced with a 140-foot-long single-span bridge, opening up 16 miles of upstream spawning and rearing habitat to salmon.

The Golf Club Hill Road culvert was identified by the state and tribe as a barrier to fish passage in the early 2000s and had been a top priority for Kitsap County streams for removal.

This project is significant because of its location, being close to the mouth of the creek and cutting off salmon from taking advantage of relatively undeveloped upstream habitat.

“The large amount of marine nutrients returning to Chico Creek each fall provides essential nutrients to the watershed, contributing to the productivity of salmonids, other wildlife and riparian forests in the watershed,” said Alison O’Sullivan, the tribe’s senior environmental biologist.

Salmon are central to the tribe’s economy, sustenance and way of life, she said. Restoration projects like this also provide opportunities for the community to learn about the importance of salmon to the area and to the tribe.

This culvert removal is the fourth major salmon habitat restoration project in the Chico Creek watershed in the past 14 years. Another priority project is removing a Navy-owned railroad trestle on Dickerson Creek, plus the replacement of the culverts under Highway 3, starting in 2022.

The tribe also is looking at possible replacement of fish-blocking culverts on Dickerson Creek, at the mouth of Kitsap Lake and in a major tributary to Wildcat Lake, in partnership with federal and local agencies.

The grant program was established by the state legislature in 2014 to identify and remove impediments to salmon and steelhead migration.

Each biennium, the FBRB submits a priority project list to the Governor’s Office and the legislature for funding consideration. Replacement of the culvert under Golf Club Hill Road topped the statewide priority funding list in the 2017-19 biennium.