Being Frank: Accord Fosters Cooperation

A 28-year-old investment in cooperation and government-to-government relations between Indian tribes and the state of Washington is still paying off today.

Through the 1989 Centennial Accord the tribes and state committed to work together for the common good of everyone who lives in Washington. It has advanced understanding between Indians and non-Indians through joint efforts to achieve our goals.

At the annual Centennial Accord meeting in October, representatives of the state’s federally recognized tribes met with Gov. Jay Inslee, his cabinet and the heads of state agencies to discuss shared concerns including the opioid epidemic, social services, broadband, education and natural resources.

Natural resources occupied a big part of the agenda for the annual meeting. Treaty tribes in western Washington are mostly pleased with the direction that the tribal/state relationship is proceeding. However, much more needs to be done for our natural resources.

Salmon co-management has become increasingly difficult as Indian and non-Indian fishermen must share a steadily shrinking resource. But increased involvement by the governor’s office has helped resolve differences, especially in the annual North of Falcon salmon season setting process.

Tribes and the governor agree that hatcheries are absolutely necessary in response to the ongoing decline of salmon because of habitat loss. Hatchery funding hasn’t kept pace with the loss of naturally spawning salmon and we all agree more funding is needed. Tribes have stepped up to cover deficits in state hatchery programs, but that is a short-term answer to a long-term need.

Tribes appreciated the governor’s strong stance during the last legislative session to help avoid bad legislation that would upend water resource law. Builders and developers want to rewrite the law, because they say it slows down home sales. However, tribes, cities and farmers all have senior water rights that would be threatened if that happens. Tribes are committed to working with the state to find a solution that protects our limited water resources as well as legal rights. In the spirit of the accord the tribes will be looking for the governor to provide strong leadership to ensure that instream flows and senior water rights are protected now and into the future.

After decades of foot-dragging by state government, Washington today has some of the most protective water quality standards in the country. These standards protect human health from toxic contaminants in our waters and the seafood we eat. Industry wants to roll back the standards because they say the rules increase their cost of doing business. Tribes praised the Department of Ecology for refusing to support the industry effort and we continue to urge the governor to tell the U.S. Environmental Protection Agency not to weaken the federally adopted standards.

The Aug. 19 collapse of a Cooke Aquaculture floating fish farm for Atlantic salmon near Cypress Island was also addressed at the meeting. Cooke was able to recover about half of the 300,000 fish being reared at the site. Treaty tribal fishermen and sport anglers captured about 55,000. The remaining 100,000 dispersed throughout the region. Tribes have significant concerns that these non-native fish are not accounted for. The fish were still being found in late November during tribal chum salmon broodstock collection efforts on the Skagit River.

Non-native Atlantic salmon are not wanted in our waters and we think immediate steps should be taken to close remaining fish farms in the state. Washington is the only West Coast state that allows Atlantic salmon farming. Inslee urged tribes to remain in close contact on the issue that is expected to be front and center during the next legislative session.

The spirit of the accord – open communication through a government-to-government approach – doesn’t stop when the annual meeting ends. Already we have followed up with state agency heads on a number of topics.

We met in mid-November with Commissioner of Public Lands Hilary Franz to determine how tribes and the state Department of Natural Resources can work better together to address forest practices, forest health, cultural resources protection and other issues.

We are proud of the Centennial Accord because it recognizes and honors the best in all of us. It is a constant reminder that cooperation is the key to successful natural resources co-management.

Being Frank: Everyone Should Celebrate The Makah Whale Hunt 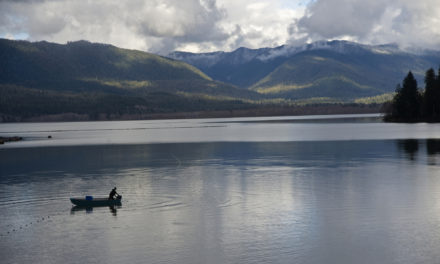