Western Washington rivers have entered the world of virtual reality.

“We can reach out to landowners where projects could be needed,” said Jason Griffith, Stillaguamish fisheries biologist. “If there’s invasive species that need controlling, for example, or a place cows could get into the creek.”

FishViews captured the major channels of the North Fork, South Fork and mainstem Stillaguamish River to the estuaries. Users can view the river from a rafter’s point of view, and also dip down below the water’s surface. Public access points have been marked to guide fishermen and recreational users.

“Education is an important part of the project,” Griffith said. “People can get a sense of how habitat influences salmon use in the river.”

“FishViews’ broader goal is to create a virtual reality map of the entire Salish Sea rivers and Salish Sea shore so that salmon recovery data can be unified and understood on a more holistic and insightful level,” said Brian Footen, president of the company.

Footen was a biologist for the Point no Point Treaty Council and Muckleshoot Tribe for 20 years before founding FishViews.

“I have a deep understanding of the importance of these rivers to the tribal communities,” he said. “It was the work I did doing salmon research that made me realize that we needed a way for people to have a better understanding of the areas where recovery actions are taking place.”

Eight species of salmonids spawn and rear in the Stillaguamish watershed, including chinook, steelhead and bull trout, which are all listed as threatened under the federal Endangered Species Act. Since Puget Sound chinook’s listing in 1999, the Stillaguamish Watershed Council developed a recovery plan and has been working to restore salmon habitat.

In addition to the Stillaguamish, FishViews mapped the Elwha River after the dams were removed, and is working in partnerships to quantify fish habitat in the Snoqualmie River and integrate a bull trout distribution study in the South Fork Hoh River.

“For the first time, people are able to view, navigate and experience our vast and beautiful waterways from their desktop, mobile and (Virtual Reality) devices,” said Scott Gallagher, FishViews CEO and co-founder. ”Creating a connection between people and their waterways enables a common understanding of their importance, and common goal of their health and preservation.” 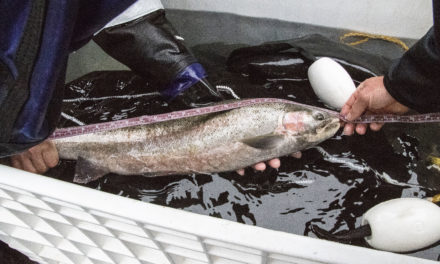