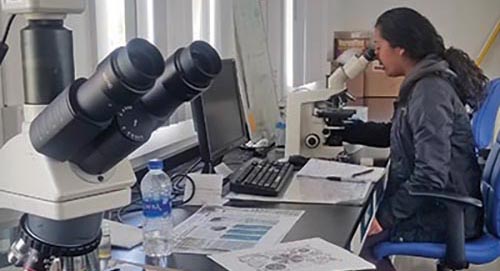 The Makah Tribe hopes that water samples from the Pacific Ocean will help scientists develop forecasts for harmful algal blooms (HABs) on the Washington coast.

The purpose is to determine the early warning signs of a pending toxic bloom that would affect coastal shellfish.

Algal blooms are caused by a sudden increase of the Pseudo-nitzschia algae, which can produce domoic acid, a toxin that makes shellfish dangerous to eat, said Riley Smith, the tribe’s water quality specialist.

“Tribes are affected economically by closures due to blooms, so the forecasts will help with decisions about harvests for shellfish such as razor clams and Dungeness crab,” Smith said.

Since 2017, the tribe has been gathering water samples from the Juan de Fuca eddy, about 35 miles west of Neah Bay as a part of their Monitoring and Event Response for Harmful Algal Blooms (MERHAB) program. The site has been identified by the National Oceanic and Atmospheric Administration as a source of the toxin-producing algae, which can reach local beaches depending on wind patterns.

Throughout the summer and fall, the tribe collects samples every month from 10 sites within the eddy. Data gathered include conductivity, salinity, temperature, depth, and water column and phytoplankton samples. The samples are analyzed by the tribe’s water lab for same-day results.

In addition to the Makah Tribe, the Hoh Tribe, Quileute Tribe and Quinault Indian Nation monitor weekly along the shore, as part of the Olympic Region Harmful Algal Blooms (ORHAB) partnership.

The partners have been studying blooms for more than a decade, developing “HAB Bulletins” for resource managers about potentially harmful algal blooms.