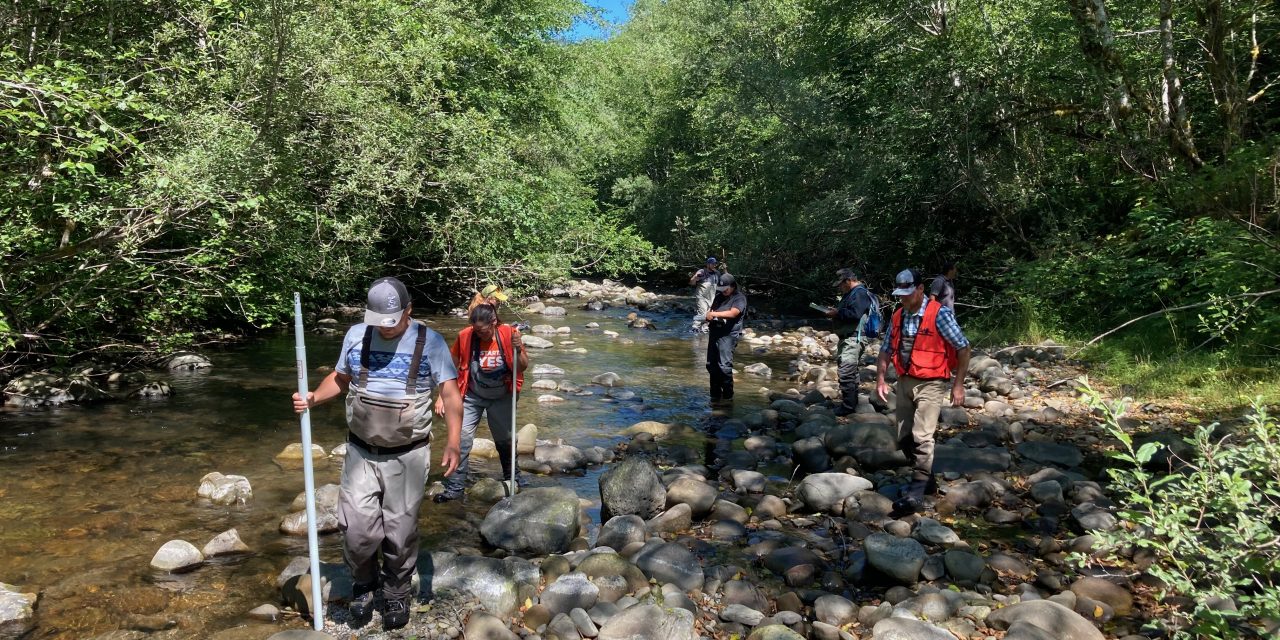 It sounds like the fusion of a science-fiction story and a detective novel: a tool that allows scientists to detect fish and wildlife’s presence in an ecosystem, even if they’re not there when the testing is performed.

But environmental DNA, known as eDNA, is real and tribes on the Olympic coast are using it to learn more about vital ecosystems and manage their treaty-protected resources.

Recently developed, it allows scientists to collect DNA from samples such as shed hair, mucus and feces. The samples are then tested to learn more about what species — sometimes expected, sometimes surprising — have been in the environment.

John Hagan, a coastal habitat biologist with the Northwest Indian Fisheries Commission, had been closely tracking the development of eDNA over the last decade as it broke free from its laboratory confines to a larger presence in field work.

“It’s changed rapidly, it’s become commonly used,” Hagan said. “But here on the coast no one was using it three years ago.”

In 2020, Hagan earned funding from Oceankind for a year-long pilot project to incorporate eDNA into coastal tribes’ data gathering. He initially worked with the Hoh, Quileute and Quinault tribes to use the technology.

The tribes gathered 146 eDNA samples at 61 sites in six river systems to analyze for species presence. Of those, 75 samples were analyzed using Next Generation (NextGen) metabarcoding, which analyzes all DNA that’s been swept up in a sample. This technique detected 193 aquatic species in these 75 sites, including 90 Pacific salmon DNA markers, indicating multiple Pacific salmon species present at several sites.

Some samples were analyzed with both techniques.

The program included work at 58 field sites with no previous documentation of fish surveys in the Statewide Washington Integrated Fish Distribution database. In two locations Pacific salmon were detected miles above the farthest point that anadromous fish are known to travel upstream, known as the end of anadromy. 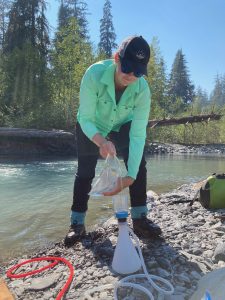 “There were more species of fish than I initially expected to find, but we also did not find a species — chinook salmon — that has historically utilized the creek for spawning,” she said. “That could be a function of the time of year we sampled, but it could also signal the degradation of habitat has made the creek unsuitable for this species.”

Quileute Tribe water quality biologist Nicole Rasmussen was eager to join the pilot project after she attended eDNA sessions with Hagan. Sampling eDNA allowed the tribe to search for the presence of chinook salmon in Camp Creek, a difficult-to-reach creek off the North Fork of the Bogachiel River. The effort paid off with the discovery of chinook in the creek, data that proves this species uses the upper habitat of the river.

The eDNA will also help the tribe make decisions as it plans to restore a historic oxbow off the Quillayute River, Rasmussen said. Testing for eDNA will help scientists answer questions, such as whether coho are using the area as refuge, what invasive fish may dwell there and whether species of interest such as mud minnows can be found.

“We want to know how fish will use that turn,” Rasmussen said.

The project has led to the development of low-cost tools to perform eDNA sample collection, and Hagan is looking forward to increased use of the technique to build baseline profiles of local ecosystems.

“eDNA is an important tool,” he said.

Above: Staff from the Hoh Tribe survey eDNA in Owl Creek, a tributary of the Hoh River. Photo: John Hagan. Story: Trevor Pyle