“We drove out to the area where I figured they might be. I’d been watching that herd for quite a while, and when we got there … were probably 20 there, mostly bulls.

“They were all picking the brush, out there about 400 yards and farther. I was out there with my son. He’s 15 years old; his name’s Larry.

“The bull was the closest one to me. He looked out of the brush. The one that gave me the shot was the young bull, so I took it. I used a 300 magnum.

“I took care of it and butchered up the meat. I shared it with some of my family.

“Usually we just cook it like you do a normal steak or roast. A lot of times, I like to cook it over an open pit with just butter and salt. Let the alder smoke cook it.

“That’s traditional. Cooking it over a fire is one of our traditional ways. Elk, that’s part of our culture. You gather the deer and elk meat and cure it, and that would be part of your staple for the winter. It was part of our ceremonies, our gatherings, even if you had a funeral or something like that. You needed a lot of meat to feed everybody.

“The opportunity to harvest is definitely a celebration. Just bringing the meat back, that’s the important thing.” 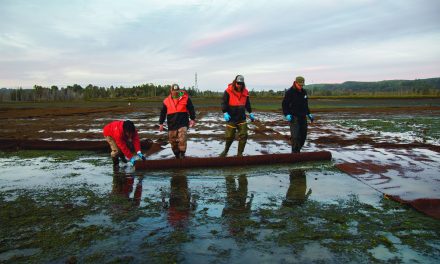