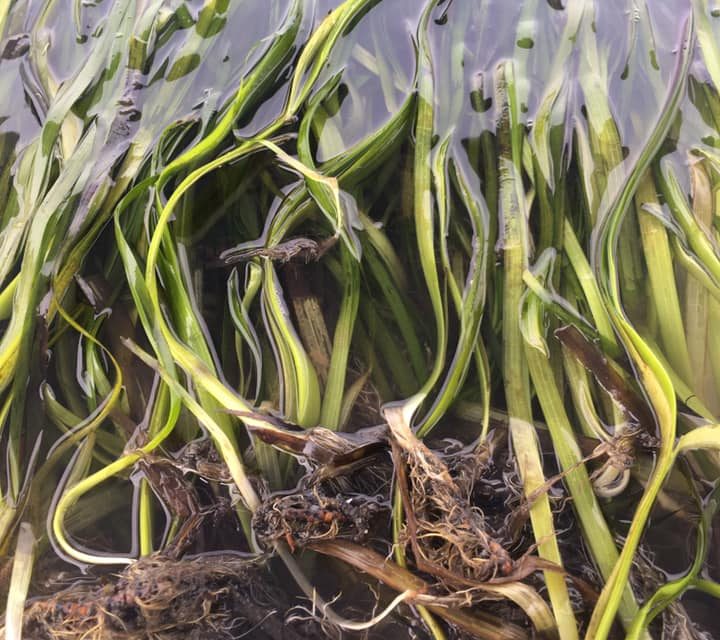 In 2017, the tribe, Pacific Northwest Laboratory (PNNL) and other partners gathered nearly 4,000 eelgrass shoots from inside Ediz Hook at the site of a proposed U.S. Navy pier. The shoots were divided and replanted on test plots within Ediz Hook and in PNNL outdoor tank nurseries at the Sequim laboratory. To the surprise of PNNL researchers, the eelgrass grew well in both locations.

“The eelgrass exploded in the tanks,” said Matt Beirne, the tribe’s natural resources director. “There is typically dieback after the initial planting, but that didn’t happen, in both the tanks and test plots. The eelgrass actually expanded.”

To build upon the successful growth, 7,000 eelgrass shoots were taken from the tank nurseries this summer and replanted along the interior of Ediz Hook.

When divers explored the original 2017 planting sites in Ediz Hook, they were surprised to find a half-dozen new, naturally established eelgrass meadows along a 150-foot segment of shoreline, Beirne said.

These particular spots had the appropriate depth and substrate for eelgrass, Beirne said, likely leading to the successful growth.

Eelgrass meadows buffer the effects of ocean acidification, stabilize the nearshore, and are used by juvenile salmon, other fish and invertebrate species for foraging, spawning and rearing.

The tribe and the lab will allow the remaining eelgrass to expand in the outdoor tanks with intentions to plant more next year, Beirne said. The tribe also collected GPS locations for all new eelgrass meadows in Ediz Hook and will monitor them for growth and health over time.

Replanting eelgrass can be done one of several ways, such as securing them with staples or rebar. The staples tend to be disturbed by crab, Beirne said, but rebar is more stable. Eelgrass plants are tied to the rebar with jute, both of which degrade over time. Oxidation of the rebar over time, releasing iron, and could actually be beneficial to the plants, Beirne said.

State of Our Watersheds: River flows hurt salmon on the Calawah River