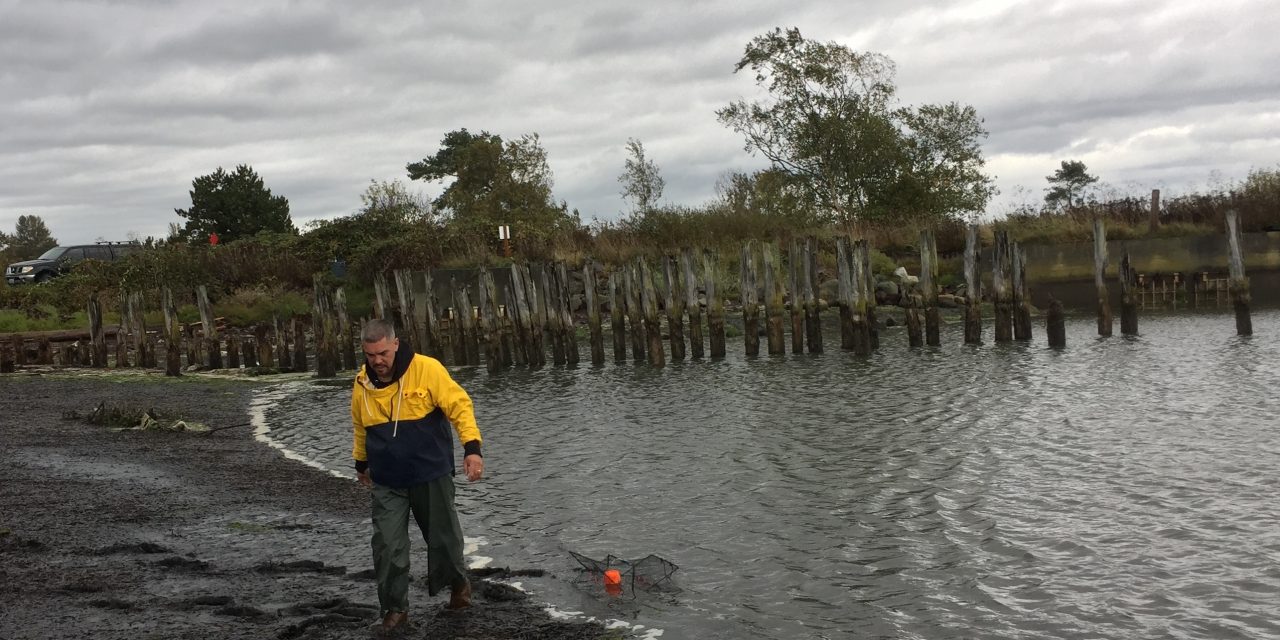 After invasive European green crab were found last month near Blaine, the Lummi Nation acted quickly to determine whether the non-native species had reached tribal beaches.

The high catch rate on Lummi Reservation tidelands is a concern to natural resources managers.

“European green crab are pernicious burrowers,” said Karl Mueller, Lummi shellfish biologist. “There is a very real concern about them colonizing here, because of the potential for habitat destruction and competition with or predation on small native crab species such as juvenile Dungeness.” 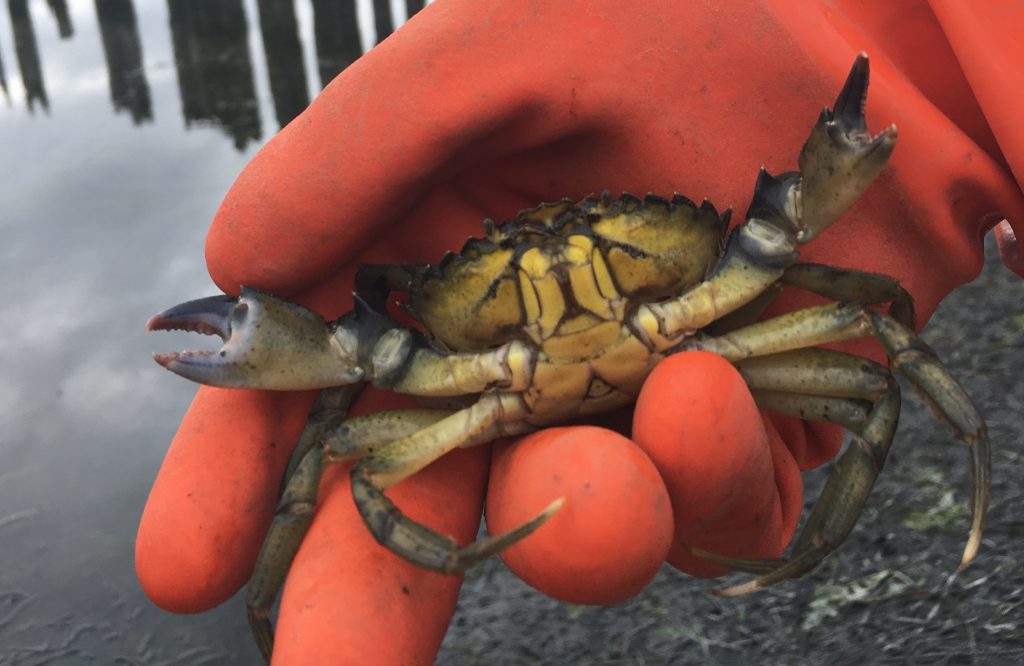 A male European green crab was captured on a Lummi beach on Oct. 8. The invasive species is most easily identified by the five spines on each side of its eyes. Photo: Megan Hintz, LNR.

Washington Sea Grant’s Crab Team has coordinated a regionwide early detection effort since 2015. In partnership with the state, several tribes and volunteers, the Crab Team is monitoring more than 50 sites in hopes of preventing invasive European green crab from establishing populations here.

Before now, European green crab only had been found a few at a time in traps in North Puget Sound. However, more than 200 have been trapped on Dungeness Spit in the Strait of Juan de Fuca. The Makah Tribe has trapped more than 1,000 European green crab near its reservation each year for the past two years.

“Managing aquatic invasive species like the European green crab is similar to preventing wildfires,” said Emily Grason, marine ecologist and WSG Crab Team program manager. “We keep a sharp lookout and respond quickly to small populations before they get too big to control. When even a single green crab is found, the first step is to quickly do more trapping to figure out the size and geographic extent of a potential population. Then we have more information to determine the best way to manage them.”

The Lummi Natural Resources Department sent the trapped European green crab to the WSG Crab Team for genetic analysis in hopes of determining the source population of the invasive species.

“We will continue sampling European green crab on reservation tidelands to improve our understanding of the geographic distribution of the crab and the age or size structure of the population,” Mueller said. “In addition, over the winter months, Lummi Natural Resources will formalize a response plan, which may include partnering with regional experts like the WSG Crab Team, implementing a widespread trapping program, assessing possible impacts to local species and habitats, recruiting volunteers, and availing outreach and education materials to the Lummi community.”

Members of the public are encouraged to keep an eye out for European green crab, but should not attempt to remove or kill them. Despite the name, European green crab can be other colors. Likewise, native shore crabs can have similar markings or colors as the invasive species.

Invasive European green crab are most easily identified by five distinct spines on the shell beside the eyes. They can grow up to about 3 inches across – bigger than most native shore crabs, but not as big as Dungeness crabs.

Anyone who thinks they’ve found a green crab on the Lummi Reservation should record the date and time of the finding, take a photo and send it to Karl Mueller (KarlM@lummi-nsn.gov) or Nick Jefferson (NicholasJ@lummi-nsn.gov). Outside of the reservation, report the same information to the WSG Crab Team at crabteam@uw.edu.