Don’t let fishing be the scapegoat

Fishing opportunities in Northwest waters have just about disappeared. It’s a situation that has strained relations between Indians and non-Indians – the state, local governments, environmental organizations, businesses and even fishermen. It’s also a condition we can improve, if we follow the truth, and that truth goes right to habitat.

Fishermen have made the lion’s share of sacrifice so far, and cutting back on fisheries to the degree we have has not been easy on our people. Empty freezers and smoke houses hurt deeply, physically, economically and culturally.

People need to know that tribes are good natural resource managers and always have been. We live on the rivers, and our scientists work on them every day. We know when the resource is healthy, and when it’s not, and we know when the habitat that sustains them is in trouble.

Well, it’s in trouble now and it affects us all. Yet, seldom do those who cause the habitat problem seem to really care or even show a true desire to understand. Rather than emphasizing a healthy ecosystem they try to look green, go on about their polluting ways and always blame the declining salmon runs on—you guessed it—the fishermen.

Just a few weeks ago, we won a federal court victory against an association that took aim at the Puget Sound Chinook harvest plan developed by the tribes and state. It wasn’t the first time we had to defend ourselves in court against such misguided efforts, and it probably won’t be the last. But I’ve said it before, and I’ll say it again. Habitat is the key to success in restoring and protecting our great Northwest salmon runs.

This is not to say that wild salmon—especially Chinook runs listed as “threatened” under the Endangered Species Act—aren’t depleted. But our harvest plan is a good, conservative approach that will not impede recovery.

Until the citizens, businesses and non-tribal governments of this area are willing to make the same level of sacrifices fishermen and fisheries managers have made through reduced harvests and reforming hatchery practices, we will not succeed.

All fishermen know salmon need habitat. It is time for all of us to work together, go after shared goals and leave the hatred behind. There is no time to waste time if we want to leave our children a world that will sustain them.

Recently, fishermen representing tribal, sport and commercial communities came together during the fisheries planning process. For a while, we didn’t talk about the pressures bearing down on our lifestyles and livelihood, but rather about our common love of fishing for salmon. These sessions can be tough and packed with emotion, largely because we love our fishing lifestyle so much. But in the end, all of us fishermen are far more similar than we are different.

We all love the environment we live and work in. We hope our kids will be able to, too.

The Creator put fish in our waters, and made them delicious and nutritious for good reason—to sustain and inspire us. Fishing is a highly desirable outcome of good management. Yes, it’s been a hard, painful choice to fish so much less. We want to fish more, but we must choose to respect the gifts of Nature. We ask that the habitat destroyers and water wasters do the same, and stop using fishing as a scapegoat. 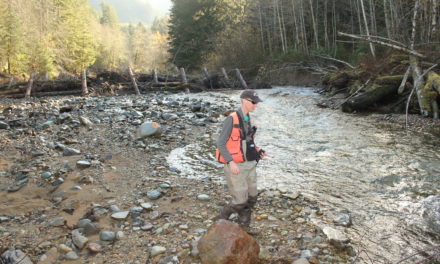