Salmon are on the same downward trend as the amount and quality of their habitat, and until we turn that around, there’s little hope for their recovery.

The tribes believe the U.S. Army Corp of Engineers’ streamlined nationwide permit system for bulkhead construction and other shoreline changes is making it too easy to damage and destroy important nearshore salmon habitat in western Washington. We think a change is needed.

Disappearing and damaged habitat are the main causes for the decline of wild salmon in western Washington. The tribes believe the Corps is encouraging habitat damage and destruction by streamlining the process to allow property owners to in some cases build the very same structures that we are working to remove as part of salmon recovery efforts. That means the federal government is working against itself. It’s why we are calling on the leadership to line up agency action and make salmon recovery a reality.

Bulkhead construction, dredging, filling and other shoreline changes are often regulated by the U.S. Army Corps of Engineers under the Clean Water through a fast track nationwide permit system. As long as a property owner meets the conditions of these permits, they are automatically re-authorized with little public review. There’s also little consideration of how multiple projects in a certain area might result in greater habitat damage.

The Clean Water Act says that the Corps can’t authorize the permits if they cause more than minor harm to the marine ecosystem alone, or combined. Yet with little or no study of the possible effects of the program, the Corps is getting ready to allow another five years of fast track shoreline changes.

We think that’s wrong and we are calling on the Corps to make a change. We are asking the Corps to take into consideration the special needs of salmon and the loss of nearshore habitat in western Washington.

We’re not asking the Corps to stop issuing permits for shoreline work nationwide, but rather for the Seattle District Office to switch to an individual permit system that acknowledges the need to protect and restore salmon habitat in western Washington.

While we hold no hope for salmon recovery under the federal Endangered Species Act, we believe that aligning the work of federal agencies affecting salmon recovery offers the best chance for success. We also believe that this approach offers the best protection of our treaty-reserved fishing rights, which are based on the fact that there must be salmon for us to harvest. Protecting those rights is the trust responsibility of the federal government.

The Corps’ nationwide streamlined permit process might make sense in other parts of the country, but not here. This isn’t the Mississippi River or Florida. They don’t have salmon. We do, and they’re in trouble. 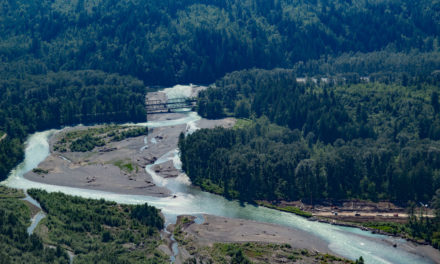