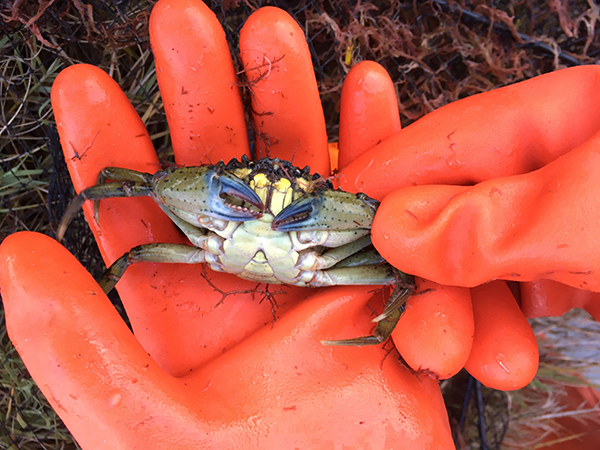 Treaty tribes are encouraged by cooperative efforts with federal and state natural resources managers and others to monitor and stem the invasion of European green crab across western Washington.

We depend on fish and shellfish for our cultural and economic survival, and we know our region’s shorelines and marine life better than anyone else. That’s why we have joined with the Washington Department of Fish and Wildlife, U.S. Fish and Wildlife Service and Washington Sea Grant and others to control their spread.

The European green crab has a shell that averages only about 3 inches wide, but it is one of the most damaging invasive species in the world. It has found a home on five continents.

The burrowing crabs have few predators. They displace native shore crabs and attack small clams. Green crab are especially damaging to eelgrass beds, which provide important habitat for forage fish that are food for salmon.

Although they are harvested for consumption in Europe, where they grow larger, green crab in North America remain small and have no commercial value. Unfortunately, they eat juvenile Dungeness crab, which poses a significant risk to one of our most economically valuable fisheries.

Green crab first arrived on the East Coast in the mid-1800s and are blamed for wiping out the softshell clam fishery. By the early 1900s they had expanded their range as far north as Nova Scotia, Canada. Ballast water from incoming ships and stowaways hidden in imported fish and shellfish products are among the sources of the U.S. invasion.

By 1989 they had reached San Francisco, and by 1998 were found in Willapa Bay and Grays Harbor. Populations remained low and caused little damage, but that has changed along with our climate. Warmer winters encourage green crab survival and have hurried their spread.

In 2012 a large population was found in Sooke Basin, British Columbia. An early detection program began in Washington in 2015, and the following year the first European green crab in Puget Sound were trapped in Westcott and Padilla bays. Small populations were discovered on Dungeness Spit and Makah Bay in 2017. By 2018 they were found in Sequim and Fidalgo bays. Last year, green crab arrived in Lummi and Samish bays as well as Drayton Harbor.

European green crab aren’t always green. Their bellies can be red or orange. The larvae can survive up to 80 days adrift in marine waters and are quick to establish themselves over large swaths of shoreline.

Once established they are effective predators because they are quicker and more nimble than native crabs. Besides young Dungeness crab and clams, they eat the same young oysters, mussels and marine worms that native fish and wildlife depend on.

European green crab are highly adaptable to a wide range of temperatures and saltwater concentrations, and are prolific breeders. Females can produce more than 500,000 eggs in one reproductive cycle.

Biologists don’t think the spread of green crab along the West Coast and Salish Sea can be stopped but it can be contained. Early detection and rapid response trapping are the most effective control measures. For the past two years the Makah Tribe has trapped more than 1,000 green crab near its reservation on the Olympic Peninsula.

Cooperation is key to halting the spread of green crab. None of the natural resources managers alone have the necessary resources to effectively fight the green crab invasion. We are committed to cooperation because it works.

The News Tribune: Voights Creek Hatchery in Orting is not on closure list