Coalition Beginning To Have Some Success Eradicating Knotweed

Japanese knotweed replaces native vegetation that provides bank stability and shade on river banks. The knotweed infestation on the Dickey started at an old homestead and over the past decades, has developed into acres of the invasive plant replacing native plants along the river.

Thanks to efforts by the Quileute Tribe, fisherman and wildlife are having an easier time getting to parts of the river following the first year of the tribe’s aggressive effort to eradicate the dense jungle of knotweed on the Dickey. But the main reason for the project is to restore native trees and vegetation along the river that are important to salmon. For example, trees provide shade, helping to keep water temperatures lower. When trees die, they fall into the stream, providing large woody debris essential for instream salmon habitat. It also displaces native plants that are food for insects and animals.

Japanese knotweed – often found as ornamental bushes in gardens, can grow as high as 20 feet in one season and can overrun all other plants around them. The plant comes from Asia and is commonly known as “false bamboo.” When the vegetation dies back in the winter, rhizomes underground extend in all directions to create new shoots in the spring. Knotweed even out-competes other notorious invasive plants such as Scot’s broom and Himalayan blackberry. It has no natural enemies in the Pacific Northwest.

The Quileute and Hoh tribes, 10,000 Years Institute, Clallam and Jefferson counties, Olympic National Park, and private landowners are working to eliminate Japanese knotweed, particularly along river corridors. Clark County in southwest Washington has created a model program that successfully eradicates the invader with a four-year effort. As part of its second-year eradication effort, the Hoh Tribe, in conjunction with project lead 10,000 Years Institute, is re-rechecking areas on the Hoh River that have already been treated with herbicide. The 10,000 Years Institute is a non-profit scientific consulting organization working with landowners, tribes, and community groups to support sustainable resource management.

The only effective eradication methods known to control knotweed are to inject herbicide into each cane of the plant or apply spray to the leaves. Sites treated by the Hoh Tribe on the Hoh River and the Quileute Tribe on the Dickey River are mostly free of the invader, though some stragglers will be treated again this year.

The Hoh River project was initiated in 2001 after a single plant moved downstream in a flood, exploding in numbers to over 9,000 stems, and doubling again to 18,000 stems in the second year. “”Because we jumped on this early, we are confident we can get rid of it, but it only takes one plant to spread, especially in the dynamic Hoh River. It’s going to be a few years of hard work, but we’re lucky to have fewer stems in 20 miles of river than is found in one acre in the Dickey,”” said Jill Silver, 10,000 Years Institute watershed program manager.

The Hoh project plans to cover all 29 miles of river where knotweed has been found during this summer’s project.

An aerial view of the Dickey River shows daunting thickets of the weed, but the progress in areas treated by the Quileute Tribe last year offers hope that Japanese knotweed can be eradicated in the river system.

“We chose the Dickey first because the weed is confined to the main stem, unlike the other major rivers of the Quillayute system,” said Geyer. “It’s mostly timber company ownership.” The work on the Dickey is funded by a Bureau of Indian Affairs Watershed Restoration Funding Program grant that expires this year. The tribe must seek another source of funding for next year.

“It will be great if we can get four to five miles of river done this year. That will put us just outside the Olympic National Park line. The Park is working on knotweed on their stretch, so eliminating it on the Dickey is very do-able,” said Geyer. “We just have to keep after it.” 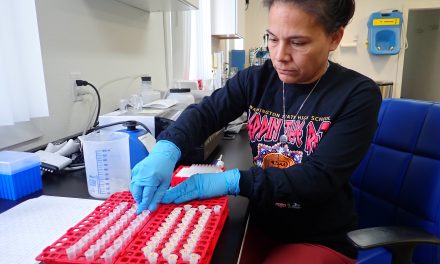