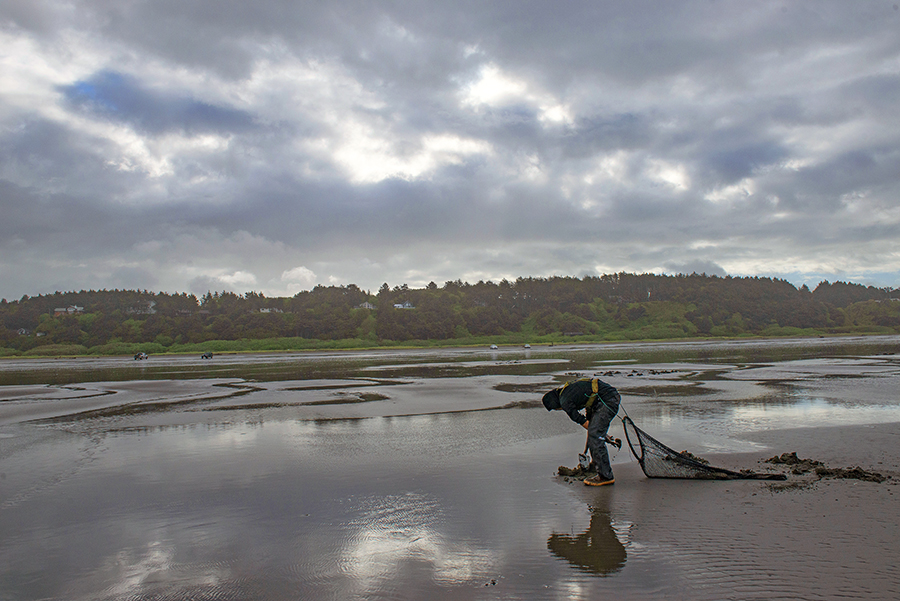 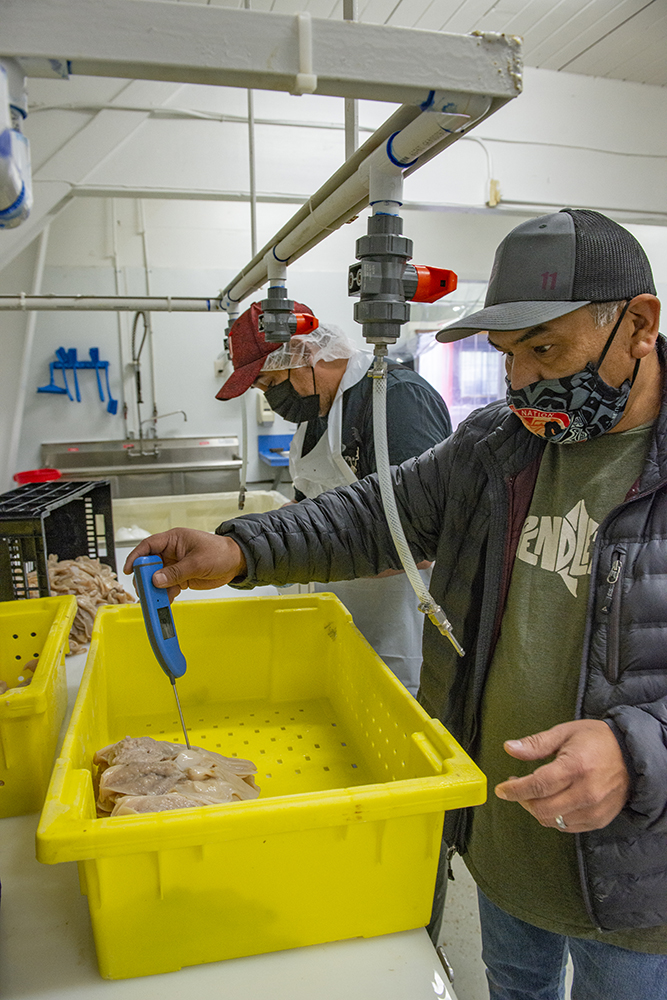 Shane Underwood, plant manager at Quinault Pride Seafood, checks the temperature of the razor clams during processing. The temperature is taken frequently and at different points in the process to make sure the clams stay at safe temperatures. Thermometers are calibrated each year.

After months of toxin-induced closures, Quinault Indian Nation (QIN) diggers got a chance to harvest razor clams during brief openers in April, May and June.

Domoic acid, a naturally occurring toxin in shellfish that doesn’t harm the clam but can sicken or kill humans, was present in amounts too high for digging for most of the harvest year that began in fall 2020.

Tribes have a reserved treaty right to 50 percent of the razor clam harvest on the beaches north of Grays Harbor. QIN members talk about being “clam hungry” when razor clams are unavailable to harvest for ceremonies and to put up in freezers. During a late May commercial dig, some tribal members were there to make extra money while others taught kids how to dig clams.

“It’s slow teaching them, but they are old enough now and you just have to be patient,” said Lloyd Saunders. He and his wife took four kids out on a tempestuous day with high winds and occasional showers. “It’s just nice to get out here and exercise our treaty right,” Saunders said. Muddy but giggling, the kids were happy to warm up inside the van and eat some snacks.

Diggers are paid at the scales when they exit the beach. Their catch is weighed and assigned to their tribal member identification. Quinault Pride Seafood has one of the only commercial packing plants for razor clams on the West Coast, outside of Alaska.

Commercial fishermen buy the clams for crab bait, while the highest graded meat is vacuum-packed and sold in markets. There is also a live market demand in Asia, said Shane Underwood, plant manager.

On a day that has nice weather and tribal member participation is high, the seafood plant employees put in about 12 hours to process the clams.

The temperature of the clams is taken frequently, as required by state health guidelines, to ensure the product remains at or below the safe maximum temperature.
Knife-wielding employees cut away the shell, grading the steaks for either high-end public sale or crab bait. Clams also are smoked and canned in a separate room.

The tribe has a store next to the plant stocked with all manner of seafood as well as shirts, mugs and COVID masks, plus items fishermen and diggers might need such as dry bags, mud boots and shovels.

A new store in Amanda Park opened in early June to better serve the tourist market on the Olympic Peninsula. Quinault Pride Seafood products also can be found at quinaultpride.online.