SKOKOMISH (October 3, 2008) – A tanker truck has given a lift to the goal of re-establishing natural chinook production in the upper South Fork Skokomish River. Throughout September, the Skokomish Tribe and Washington Department of Fish and Wildlife (WDFW) staff hauled adult salmon to the far reaches of the Skokomish River watershed.

The fish are returns to the state’s George Adams Hatchery.

By mid-September, employees from the tribe and WDFW had collected and transported about 400 adult chinook. Additional supplementation is planned for 2009.

The fish were released in the upper South Fork of the Skokomish River at a site near the confluence of LeBar and Brown creeks, about 15 miles upriver from the George Adams Hatchery near Shelton. The chinook are expected to disperse both upstream and downstream of the release site and help seed the watershed.

The pilot program calls for monitoring the spawning success of the adult salmon released into the river as well as their out-migrating offspring. Dispersal patterns, spawning distribution and spawning timing of the fish will be examined. All of the adult fish released are tagged for identification with individually numbered spaghetti-type tags to distinguish them from any adults migrating naturally into the South Fork.

A screw trap that safely captures young out-migrating salmon will be used to assess the spawning success of the transplanted adults beginning in 2009. The joint chinook supplementation project being conducted by the tribe and WDFW is aimed at restoring some or all of the historic distribution of natural chinook to the South Fork. Restoration of these fish is an integral part of the recovery of this species in the Skokomish watershed.

The George Adams hatchery pumps out large numbers of chinook, which contribute to sport and commercial fisheries in the region. Genetic tests have shown, however, that chinook spawning in the river are not only lower in number, they are virtually identical to those coming back to the hatchery. Historically, the South Fork was a significant producer of chinook salmon. The river produced both spring and summer/fall populations of chinook. Work is also moving forward to re-establish spring chinook in the North Fork.

“Together with other efforts in the chinook recovery plan, such as habitat restoration and improved passage in the Skokomish watershed, this project is expected to contribute significantly to population recovery,” said Cindy Gray, the tribe’s finfish management biologist. 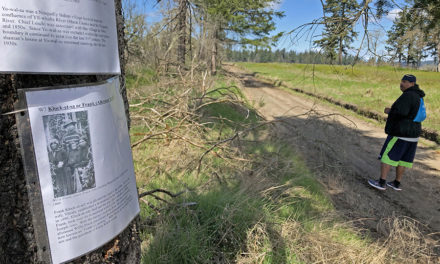