Northwest tribes are supporting southern resident orcas by releasing more fish from their hatcheries so the whales have more prey to feed upon.

A lack of salmon, especially chinook, is a primary reason for the decline of the whales, and chinook stocks from Puget Sound have been identified as priority stocks for their diet.

The state Legislature has provided funding to tribal and state hatcheries to increase production for the orcas, said Ron Olson, hatchery programs manager for the Northwest Indian Fisheries Commission. Initially, the funding was just for chinook, but it has been expanded to include coho and chum salmon, which orcas also eat.

The goal of the funding was to identify facilities with unused rearing capacity to raise more fish, Olson said, and if needed, make minor infrastructure improvements to help support expanded capacity, such as installing new net pens or rearing containers. Nine tribes and 12 hatcheries are involved.

For 2022, the tribe anticipates receiving 550,000 yearlings from the state’s George Adams Hatchery near Shelton for its net pen program. The fish are reared in the saltwater net pens for three to four months prior to their release so they can acclimatize to increase survival.

The Skokomish Tribe benefited from the program by being able to improve the infrastructure at its Enetai Hatchery while increasing the capacity to raise fish.

The tribe removed old concrete raceways and 50-year-old fiberglass tanks, and upgraded to circular ponds. New incubation boxes were installed, as was a chiller system to help regulate the growth of fish.

The tribe currently raises 3,000,000 juvenile chum at its hatchery and plans to increase that to 5,000,000. The upgrades also would allow the tribe to add new fish stocks, such as coho salmon, said Jonathon Wolf, the tribe’s natural resources deputy director.

“Unfortunately, because of the low chum returns the last two years, we’ve not even come close to our old goal, let alone the goal of producing more fish for orcas,” Wolf said. “For 2020, we only had 500,000 chum. All the money in the world won’t help if ocean conditions and degraded habitat prevent adequate returns of fish.”

The success of the effort will depend on monitoring hatchery releases as they out-migrate from the rivers and when they return as adults, said Mike Crewson, Tulalip Tribes fisheries enhancement biologist.

“The best, most robust way to increase hatchery production to support the orcas is to assess chinook growth as they move through the estuary and nearshore to the deeper offshore marine environment, and compare that to the returning adults’ growth and survival, so we can refine rearing and release strategies if warranted,” he said.

Monitoring will help assess contribution to the whales’ diet and address concerns regarding how hatchery fish affect the survival of natural-origin chinook.

“The bottom line is that we’re trying to increase the contribution to southern resident killer whales’ diets with the least impact on wild fish,” he said.

It will take several years of monitoring juveniles and adult returns to determine whether hatchery release timing can be adjusted to improve marine survival and contribution to the orcas’ diet.

“We are carefully increasing production while monitoring the effects to see what the contribution is,” Crewson said. “It won’t help to double production if we can’t also increase marine survival.”

The timing of releases and returns is an important part of the equation, Crewson said.

“They know when whales are generally in the San Juan Islands and when they move into Puget Sound and out to the coast,” Crewson said. “We’ll have to look over time at when we’re seeing a lot of large-bodied fish return, to make sure they’re present when the whales are present.” 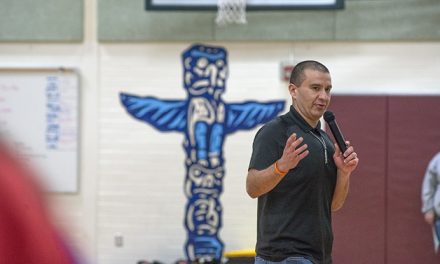