Last week, Crosscut published a profile about Billy and his life’s work, interviewing tribal and environmental leaders and politicians.

The late Billy Frank Jr., a member of the Nisqually tribe, asserted tribal rights to harvest Northwest salmon long before those rights were recognized by the courts. For this brash insistence, Billy would be “chased and tear-gassed, tackled, punched, pushed face-first into the mud, handcuffed and dragged soaking wet to the county jail.”

He was just 14 when he was first arrested for fishing in the Nisqually River near his home. He would be dragged to jail 50 more times before he was finally vindicated by the Federal Courts in 1974. Judge George Boldt’s landmark ruling that year reaffirmed the rights of Washington’s native tribes to fish in their “accustomed” places, rights that had been guaranteed, though not enforced, by federal treaties signed back in the mid-19th century.

The Boldt Decision, as it came to be known, wasn’t the end for Billy. His fight was about more than fishing rights, says Leonard Forsman, Chairman, Suquamish Tribe. It was about “his commitment to preserving salmon runs for the present and future generations, not only for economic and ceremonial purposes, but also spiritual. It was about the importance of salmon to the identity of the Nisqually and all the neighboring tribes … and about his commitment to protecting the sovereignty of tribes around the nation.”

Billy stayed committed to those causes right up to the day he died: May 5, 2014. “He was on his way to a meeting with federal officials over habitat on the day he passed on,” says T.J. Green, Chairman of the Makah Tribal Council. “He was one of those people who was willing to do what was necessary — even at great personal cost.”

“They all started at each other’s throats,” recalls Evans. “Things kept stalling until Billy stood up and, with his calm, peaceful intense words, said, ‘Nobody’s going to get everything they want here and the salmon are the ones at risk and that’s what we should be focused on.’ The Indian tradition is an oral tradition and there are many Indian orators and Billy was one of the best.”

Billy took the same high road in his work on the Nisqually River Council, a body that he helped create and chaired for 30 years. Farmers, loggers, small towns, big corporations, the U.S. Park Service, Joint Base Lewis-McChord and other Nisqually watershed stakeholders had been at war for years. For the first few years of the Council’s existence they kept right on fighting.

But then, recalls Bill Ruckelshaus, something extraordinary happened: Billy and Jim Wilcox, who grew up on and would later take over his family’s large dairy farm near Roy, WA, shook hands and said, ‘We’ve got to stop all this fighting and harmonize our interests.’”

Call it the handshake that changed history.

“Billy was a guy who had every right to hold grudges against the white community,” Ruckelshaus continues. “He’d been in jail. But his willingness to work with the dreaded farmer shamed everybody else who was holding all these grudges, and they came along. Billy did it with his character.” To this day, the Nisqually River Council remains a model for how to resolve western water disputes.

Billy Frank Jr. was charismatic, a leader who commanded respect and gave it. It was there “in the way he carried himself,“ says T.J. Greene.  In the way he spoke.”

Billy Frank Jr “was a warrior,” says W. Ron Allen, Chairman and CEO of the Jamestown S’Klallam Tribe. “It didn’t matter who he was engaging – presidents, CEOs. People didn’t intimidate him. He had no fear.”

Allen remembers the time in the late ‘80s when the tribes were quarreling with then Senator Slade Gorton over budget cuts. Allen, a young tribal leader at the time, was with Billy when he stormed into Rep. Norm Dick’s Washington, D.C. office. Dix was in a closed-door meeting with top military brass, but Billy insisted that his assistant open the door. “It was a giant room, huge table, all these uniforms and Norm Dicks at the head,” Allen recalls. “And Billy said, ‘Norm! You’ve got to talk to me right now; they’re threatening our treaty rights.’”

When he died, Billy was still at work protecting native treaty rights and trying to consolidate oversight of the many federal policies (and agencies) that affect salmon habitat. He met with Interior Secretary Sally Jewell earlier this year to express his concerns that no one agency or person is in charge of protecting this precious resource.

“Billy brought a lot of forces together,” says Allen. “The environmentalists were natural allies, but he convinced the business sector, farmers, the timber industry, Boeing that we do have a common interest here and we need to make sure the salmon will be part of the Northwest legacy for all generations ahead.”

Billy Frank Jr. risked his freedom and his life to preserve his heritage, our heritage. He had the courage to reach across social, cultural and political divides to save a precious natural resource for all of us. And his legacy will endure, says W. Ron Allen.

“He instilled in the younger generation of leaders the message that you have a duty to contribute to the protection of this resource. He created a foundation that will withstand the test of time. We just have to remember what Billy would do.”

Lummi, Nooksack Salmon Recovery Effort To Be Discussed At Meeting 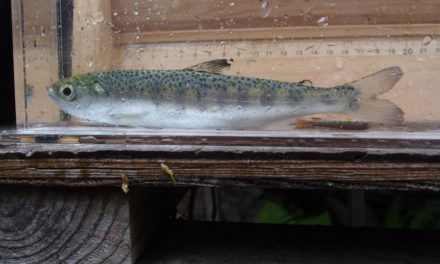