Being Frank: Time Moves On, But Treaties Remain

One hundred and fifty-three years ago, tribes from throughout the South Puget Sound region gathered near a grove of trees at the mouth of the Nisqually River near what is now Olympia. These were powerful men and women — chiefs and other cultural leaders — who waited in a driving rain to hear the words of Isaac Stevens, Washington’s first Territorial Governor.

That grove of trees included a Douglas fir that came to be known as the Treaty Tree. Well nourished, it towered above the prairie, sprouting bright green new growth each spring. Its cones dropped every fall, seeding new trees that still survive in the area today.

For thousands of years tribal members had come to gather food, grasses and medicine near this place called Medicine Creek, known today as McAllister Creek. They dug clams and harvested salmon, waterfowl and other natural treasures, while the Treaty Tree flourished in the pure air and rich soil.

It was a wet, cold day when Stevens summoned the tribes to sign the Medicine Creek Treaty that would forever change our lives. Through that treaty, tribes ceded millions of acres of land and ultimately agreed to move to small reservations. But through the treaty we also kept some things to ourselves that were most important to us: the right to fish in all of our traditional places, the right to hunt and the right to gather shellfish and cultural materials.

The Treaty Tree, like us Indians, somehow survived the massive population increase, growing pollution and timber razing in the decades that followed. But like all living things, the Treaty Tree’s days were numbered. For many years, drivers on I-5 could still see the old snag as they zoomed past.

This past winter, most of what remained of the Treaty Tree came crashing down during a storm. It happened this past December, the same month that the Medicine Creek Treaty was signed in 1855. About 40 feet of the snag still stands; the rest toppled toward into the estuary.

As a man of the land and the water, I know this is part of the natural process of returning to the earth from which we all came. I also know that the trees spawned by the historic fir are even now spreading seeds of their own.

The Treaty Tree may have fallen, but the treaties are alive. Treaties are legal contracts between tribal and federal governments, and they are as valid today as the day they were signed. Even the U.S. Constitution defines them as “the supreme law of the land.”

People forget that non-Indians in western Washington have treaty rights, too. Treaties opened the door to statehood. Without them, non-Indians would have no legal right to buy property, build homes or even operate businesses on the millions of acres tribes ceded to the federal government.

Treaty rights should never be taken for granted — by anyone.

Trust Is The Key To Better Fisheries Management 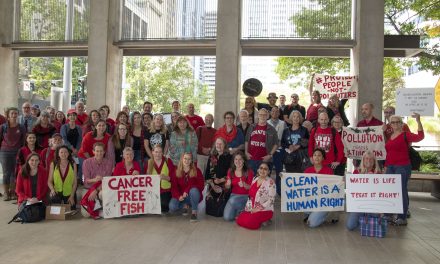 Toxic Politics Are Assaulting Our Health