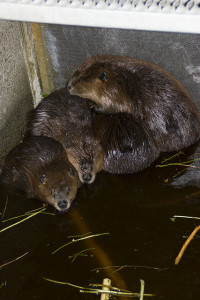 Six beavers nestled together in a furry cluster in one of the manmade lodges, confirming wildlife biologists’ suspicions that this was a family unit. Tribal staff, along with biologists from the University of Washington (UW), had captured the beaver colony in Duvall, where they were flooding a blueberry farm.

“The mother beaver is more than 50 pounds,” said Jason Schilling, wildlife biologist for the Tulalip Tribes. “And there’s one kit that’s about the size of a football and pretty cute.”

The beavers were pioneers of the Skykomish Beaver Project, a partnership among Tulalip, UW, U.S. Forest Service and other agencies. The project is relocating certain beavers from the Snohomish lowlands, in places where they are considered a nuisance, to public land in the Skykomish River system.

Beavers are nature’s wetland engineers, instinctively building dams, lodges and underwater passages to store food and protect themselves from predators. In doing so, they create reservoirs of cool water that salmon need to survive, but sometimes their industriousness interferes with human development.

“Beaver flooding can be very costly,” said Ben Dittbrenner, Ph.D. candidate in forest ecology at the University of Washington. “We can often reduce human-beaver conflicts non-lethally by installing devices that stop them from plugging up culverts. This is our preferred method of managing beavers, since it keeps them on site and provides an amazing amount of ecological benefit. However, sometimes it’s not possible to manage them, and relocation is the best option.”

Biologists from Tulalip and UW assembled a temporary lodge from woody debris in a creek on Forest Service land near the South Fork Skykomish River before transferring the six beavers there. Again, the family huddled together inside the lodge, while starting to work on chewing their way out. Wildlife cameras were installed to monitor the beavers as they leave the lodge and build new dams.

“Our goal is to release them into headwater streams to restore ecological integrity and improve water quality, which benefits salmon and other fishes,” Schilling said. “Coho salmon do especially well in beaver ponds.”

In 2014 and 2015, the biologists plan to move about 30 beavers to 15 tributary locations selected for habitat potential. Because beavers are social animals, they are being relocated as family units.

The relocated beavers also could offset the effects of a warming and drying climate by building small water reservoirs high in the watershed. “Beavers are marvels of engineering, we’re just hoping to tap into that,” Schilling said.

Beavers in the northwest were hunted almost to extinction for their lush pelts in the 19th century. 

“The beavers’ disappearance had unexpected negative impacts to watersheds, including deeply cut stream channels, the disappearance of natural reservoirs that store water – useful in late summer when it’s needed the most – and the loss of riparian and wetland areas that benefit salmon,” Schilling said.

More pictures of the beaver family.

Keeping An Eye On Water Quality In The Puyallup