The Associated Press posted an update recently about the removal of the Elwha River’s two fish-blocking dams, the Elwha and Glines Canyon, and the rapid changes witnessed  by the Lower Elwha Klallam Tribe and scientists involved since dam deconstruction started in 2011.

Marine creatures such as eulachon, or candlefish, and Dungeness crab have been documented in the estuary for the first time in decades.

“I was surprised by a lot of things, but I was stunned by how fast the estuary has expanded,” said Robert Elofson, river restoration director with the Lower Elwha Klallam Tribe. The tribe is a partner with the National Park Service in the $325 million river-restoration project.

An estimated 40 to 50 percent of the total expected sediment has come down the river so far, said Andy Ritchie, project hydrologist with the National Park Service. Not all of what remains will make its way down, he said. Some won’t be released except during very high river flows, and some is beyond the river’s reach, Ritchie added.

All that sediment has created turbid and muddy waters for migrating fish, and scientists initially wondered how salmon and steelhead would react.

But tribal and federal biologists tracking fish have been able to answer intriguing questions, including: When the dams are removed, will the fish survive in turbid waters?

“Those fish are finding the clear creeks, and they’re spawning,” said John McMillan, a biologist with the National Oceanic and Atmospheric Administration. “The clear water sources are really important.” 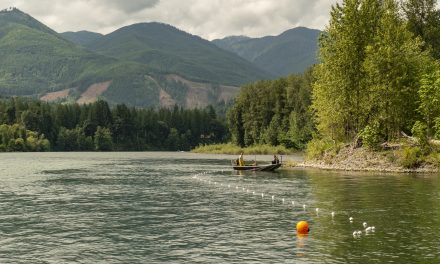 Nisqually Tribe looking for connections between zooplankton and salmon