A salmon-focused look at the American Dipper 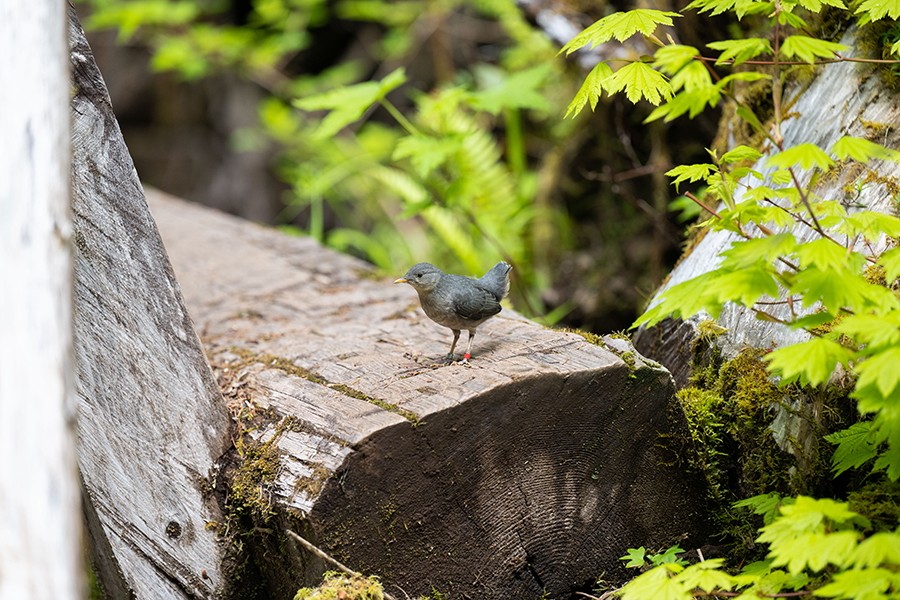 The Lower Elwha Klallam Tribe wants to better understand how American dippers, North America’s only aquatic songbird, respond to the presence of salmon in their territories.

For more than a decade, the tribe has contributed to research on dippers in the Elwha, Sol Duc and Dungeness rivers, and for comparison, ongoing studies that examine dippers in streams without salmon, such as Barnes Creek on Lake Crescent.

Dippers are a great indicator species because they live in both aquatic and terrestrial environments, said Scott Walters, a Ph.D. candidate from the University of Western Ontario who is leading the research. The tiny gray birds live on land and breathe air but also have aquatic behaviors such as swimming and flying underwater. They primarily feed on macroinvertebrates (tiny aquatic bugs) and salmon fry and eggs.

“They’re getting their nutrients from the salmon directly as well as indirectly through invertebrates that are also eating the salmon,” Walters said. “Then they’re transmitting the nutrients through themselves, into their chicks and into the terrestrial environment.” 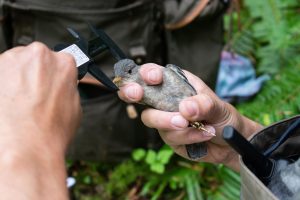 A dipper’s head is measured as part of the data gathered to better track the development of the songbird population. Photo: Tiffany Royal

Walters specifically is interested in learning if dippers acquire certain fats from anadromous salmon, whether those fats convey benefits, and how natural barriers or dams that block fish may block the dietary compounds that fish may carry.

Fats can be important to different aspects of animal physiology, especially development, Walters said, and young birds receiving a greater amount of certain fatty acids could have improved development.

The work is a follow-up to a 2011 study that showed that the health of the birds relied on marine sources such as salmon. That study also showed how dippers help transport nutrients from one environment to another, and looked at barriers both above and below the fish-blocking dams on the Elwha River at the time.

The data from this work will support the tribe’s ongoing effort to document salmon recolonization and restoration on the North Olympic Peninsula, said Kim Sager-Fradkin, the tribe’s wildlife biologist. It also may answer ecological questions about how wildlife is impacted by and benefits from nutrients provided by salmon.

“For us, it’s a continued storyline that we tell a lot in outreach materials—the benefit of salmon nutrients in wildlife—with the dipper being the perfect example in these systems,” she said.

The Lower Elwha Klallam Tribe has been studying the American dipper on the Olympic Peninsula for more than a decade to better understand how salmon are an important part of the songbirds’ diet. Story and photos: Tiffany Royal